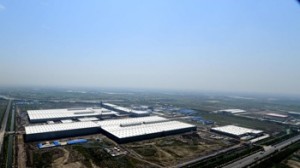 Jaguar Land Rover’s 50:50 joint venture with Chinese carmaker Chery Automobile – CJLR – has opened its first plant in the Changshu Economic Development Zone, 80km north of Shanghai. Its production is based on an international supply chain, including a considerable amount of material imported from Europe and the UK.

The RMB10.9 billion ($1.8 billion), plant will begin with production of the Range Rover Evoque, exclusively for the Chinese market. Another two models are planned for the plant, and JLR has confirmed that will include Jaguar models. Annual production capacity is aimed at 130,000 units.

The Changshu site will also be the base for a Greater China Research and Development Centre and engine manufacture.

"The opening of this world-class facility is an important milestone for Jaguar Land Rover,” said Dr Ralf Speth, CEO of JLR at the plant inauguration. “Since its launch, one in five Range Rover Evoques have been sold in China. Our decision to manufacture the Range Rover Evoque in Changshu is a result of our commitment to bringing more Chinese vehicles to Chinese customers."

Earlier this year, CJLR director of material planning and logistics (MP&L), Rui Zhu, outlined the logistics setup for the new plant. Based in part on JLR’s strategy in Europe, CJLR has also opted for a ‘lead logistics provider’ (LLP) model, in which most of the inbound logistics operations will be managed by providers. However, to JLR, where for several years DHL has been the LLP for inbound and in-plant logistics, the joint venture in China has split up services between two LLPs.

While Zhu declined to release the names of the providers, a Chinese provider is handling the supply chain from the UK and Europe. Parts are consolidated in Birmingham and shipped via the UK port of Felixstowe to the port of Shanghai. From there they are taken by barge along the Yangtze River to the port of Changshu. Delivery time is nine weeks but the company has chosen a low inventory model. The plant carries one week of safety stock in the warehouse, with a further week’s worth on the barge and another week’s worth at the port of Shanghai.

The company plans to establish more China-based content but this is expected to take time, at least for UK-derived Land Rover and Jaguar models.

On the supply of content from China, CJLR will provide production and delivery plans from which a major joint-venture logistics provider will engineer routes, including direct deliveries and milkruns. The majority of the material will move to the plant warehouse, although there are also parts delivered directly to the gate based on sequence calls, including bumpers, tailgates, wheels and tyres.

The company has also established five spare parts distribution centres – in Chongqing, Suzhou (2), Beijing and Guangzhou – and has 161 operational dealers (with 247 appointed).

On the outbound side the Changshu plant has a dispatch yard for 2,000 vehicles, while the nearby port has ro-ro facilities. The motorway infrastructure around Changshu is also well developed.

China is now Jaguar Land Rover’s single largest market; Bernstein Research has predicted that the carmaker will sell 130,000 vehicles in the market his year. One in five Evoques are currently sold in China.

Inaugural sales of the China-made Range Rover Evoque are due to begin in early 2015. JLR said further details would be released at the Guangzhou Motor Show held in November this year.