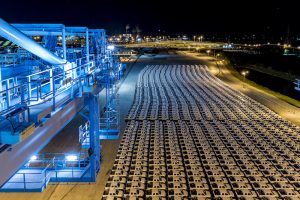 The US port of Jacksonville in Florida is adding 40 hectares of processing and storage space at the Dames Point Marine Terminal. Construction will begin in January.

The port authority (Jaxport) said it would be a multi-million-dollar expansion, supported mostly by private investment but with some government funding.

In the first phase of the project, which is due for completion in late 2018, the port will increase vehicle-handling capacity to accommodate 50,000 units. Overall handling will increase by 25% in all when the whole project is complete in two to three years’ time.

The expansion follows a year of record vehicle volumes at Jaxport and comes at a time when US ports are facing a tightening of capacity. To date this year, the port has moved 693,000 vehicles – an all-time high, according to the authority. Last year, it handled 652,000 vehicles and was ranked the third busiest vehicle handling port in North America as well as the second busiest in the US behind Baltimore.

“We have seen significant import growth from Mexico, Europe and other markets,” a spokesperson for Jaxport told Automotive Logistics. “Overall our imports grew 12% during our last fiscal year.”

The port has three terminal operators – Amports, Southeast Toyota Distributors and WWL – all of which have seen continued growth.

“The steady growth of our auto business speaks volumes about our efficiencies,” said Roy Schleicher, Jaxport executive vice-president and chief commercial officer. “We are committed to supporting our auto partners with the tools they require to continue to expand their businesses in Jacksonville.”

Jaxport said the vehicle processing expansion would offer vessels direct waterside access for loading and unloading with easy access to major interstate highways on its doorstep. The port also said there were plans to develop direct rail access to the terminal at full build-out. The area is served by North American rail operator, CSX.

The port offers global services from 13 of the world’s leading ro-ro carriers as well as on-demand service to other processors as needed.