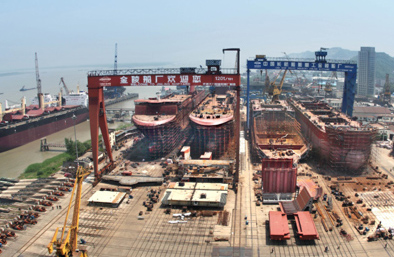 Shipbuilder Jinling has handed over pure car and truck carrier Grande Halifax to Grimaldi, the last of three vessels the Italian shipping line ordered from the Chinese company and which has been built at its Nanjing yard.

The carrier will be deployed on the Mediterranean-North America weekly service operated by Grimaldi and joins sister vessels Grande Baltimora and Grande New York.

Designed to carry 6,700 CEU (car equivalent units), or alternatively 4,000 linear metres of rolling freight and 2,500 CEU, the Grande Halifax is equipped with four hoistable decks enabling it to transport trucks, tractors, buses and excavators up to 5.2 metres high.

The carrier’s managing director, Emanuele Grimaldi, said the group would be bolstering its fleet with the delivery of seven more vessels “which will be the biggest car carriers on the market”.

Plans for that increase date back to 2015, when the company ordered five car carriers from Yangfang’s shipyards in China at a cost of $300m. Also sailing between the Mediterranean and North America, the vessels will each be able to carry 7,000 cars with 13 decks.

The contract was subsequently increased to seven carriers and delivery is expected from the middle of this year, a Grimaldi spokesman told Automotive Logistics.

The Naples-headquartered group has a fleet of more than 120 vessels and specialises in the operation of ro-ro vessels, car carriers and ferries.