JLR plans logistics centre near Solihull plant in the UK 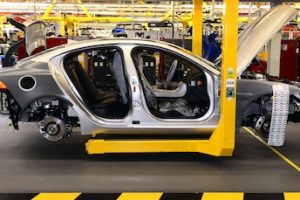 Jaguar Land Rover (JLR) is planning to build a 90,000 sq.m logistics centre in Solihull, in the UK, to manage inbound parts to its facility at Lode Lane.

The Lode Lane assembly plant –which makes Land Rover Discovery and Range Rover Sport, along with the Jaguar XE and F-Pace – has trebled in size since 2011 as JLR has grown to become the biggest carmaker in the country and the company is now looking for greater logistics efficiencies to support the production operation.

JLR has submitted a planning application to Solihull Council for the development of a site at Damson Parkway, near Birmingham International Airport. The facility will include a 91,800 sq.m warehouse with 78 docking points and will feed parts to the Lode Lane plant on a just-in-time basis.

As revealed in a recent interview with JLR’s director of global material planning and logistics, David Dyke, the carmaker has fully revamped Solihull’s stamping of aluminium bodies for the Range Rover and added an entirely new bodyshop for steel and aluminium parts for Jaguar. A new assembly hall opened in 2015, allowing the introduction of the Jaguar brand to Solihull for the first time. JLR also recently built a bespoke dispatch yard at the plant for finished vehicles.

The company plans to remove or refit older buildings to make way for new manufacturing.

JLR has three main logistics facilities in the West Midlands region of the UK. They are at Hams Hall, TyreFort and Midpoint, all of which are north of the Solihull plant. The carmaker said the new facility would save it around 1m truck miles a year in the region.