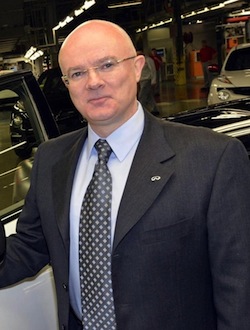 As part of some widespread management changes at Nissan, John Martin, senior vice president in charge of Nissan's manufacturing, purchasing and supply chain management in Europe, is replacing Bill Krueger who carries out a similar role for the carmaker’s North American operations. Kreuger is moving to a new position as executive vice president of Nissan's Japanese Automatic Transmission unit (JATCO) with oversight of the Americas region.

Martin will now be based in Nashville, Tennessee and report to Jose Munoz, who becomes chairman of Nissan North America on January 1 2014.

Martin's role in Europe is being filled by Colin Lawther, previously vice president, Production Engineering and Quality Engineering, NE at the carmaker.

In a previous role Martin was vice president of the Americas Region for Supply Chain Management at Nissan North America between 2007 and 2009.

Prior to his role in Europe he was corporate vice president, Global Supply Chain Management at Nissan Motor in Japan

As well as being chairman of the board of NMUK, Martin is a member of the Management Committee for the AMIE region, which includes Africa, Middle East, India, Europe and Russia, and is president of Nissan Motor Iberica SA amongst a number of other responsibilities for the carmaker.