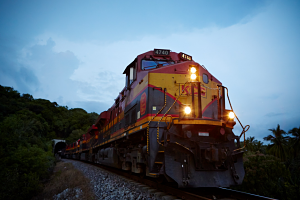 Kansas City Southern (KCS) has said it is paying 70% more for its fuel in Mexico than it does in the US, following price hikes of 15-20% in some parts of the country at the start of this year, which have led to widespread protests.

Speaking at his company’s fourth quarter results briefing, KCS chief executive Pat Ottensmeyer said a Mexican fuel excise tax credit ($60m) did help offset the steep increases. “But we will need to aggressively manage our fuel procurement and locomotive management strategies to make certain we don’t experience any margin erosion as Mexico continues to work through its energy deregulation timelines,” he added.

In the fourth quarter the company paid $2.78/gallon for Mexican fuel at constant currency rates, versus $1.62 in the US.

In recent times, US refiners have spotted an opportunity to export fuel into the neighbouring country after a 2013 government decision to open up its oil reserves to foreign investment.

Mexico has also become a net importer of US oil, having switched from being a net exporter of almost 1.5m barrels per day just a decade earlier.

“The level of interest we are seeing from US refiners for exporting fuel into Mexico continues to gain momentum and we expect that to drive higher shipments of refined products, beginning in 2017,” said Ottensmeyer.

KCS itself has participated in the opportunity, announcing a joint venture investment with Watco and WTC Industria into the construction of a liquid fuels terminal in San Luis Potosi recently.

“This project perfectly aligns the goals of Mexican energy reform with the desire of US refining companies to expand their operations and enter new markets,” stated KCS on January 11th.

For now, supply remains restricted, with the country said to be holding about two days’ worth of refined fuel stocks compared with a 90-day stock in the US, according to KCS management.

The company is a major cross-border transport provider between Mexico and the US, including for the movement of automotive parts and finished vehicles.

Automotive volumes were up 5% but revenue fell 13%, largely due to a weak peso. Automotive revenues were only down 2% when adjusted for the currency impact, however.

Logistics costs in Mexico will be among the issues debated at this year's Automotive Logistics Mexico conference, which takes place from January 31st to February 2nd in Mexico City.