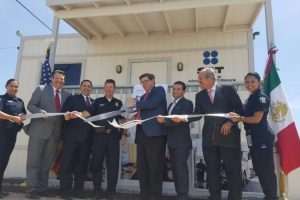 A new cargo processing facility that should improve security for shipments heading northbound from Mexico was launched at the Laredo rail border crossing in the US state of Texas last week, as negotiations in North American on the North Atlantic Free Trade Agreement (Nafta) got underway.

The Unified Cargo Processing facility has been built by rail provider Kansas City Southern (KCS) near the railhead at Laredo as part of a joint project involving US Customs and Border Protection (CBP) and Mexican Customs (SAT).

According to the CBP, it will allow Mexico Customs to complete outbound inspections and let CBP perform inbound inspection processes simultaneously, eliminating unnecessary delays and duplication while maintaining security.

A spokesperson for KCS said the new Laredo processing facility would help both finished vehicle and automotive parts movements “by allowing additional capacity for a more consistent and reliable train service”.

The rail crossing at Laredo is the busiest on the US-Mexico border and processes 23 trains in total every day.

“The ongoing collaboration and partnership efforts between CBP, SAT and Kansas City Southern have yielded an innovative approach to processing increased rail traffic through the largest rail corridor on the southern border in a way that helps both countries realise their security and facilitation priorities,” said CBP’s deputy executive assistant, John Wagner.

He was joined at a ceremony to mark the launch of the facility last week by Patrick Ottensmeyer, CEO and president of KCS, and officials including Mexican SAT assistant commissioner Gerardo Suarez Hasbach, Laredo mayor Pete Saenz and US congressman Henry Cuellar.

In a statement, KCS said that eliminating stopping trains on the bridge would increase the velocity and fluidity of train movements over the border, increasing security and throughput while reducing traffic congestion.

KCS is one of the main providers of rail services for finished vehicles moving between Mexico and the US.

The problems facing rail shipments of vehicles in Mexico were among the key issues highlighted at the recent FVL Import Export summit in Baltimore.

For more on the issues affecting finished vehicle rail movements between Mexico and the US and how rail compares with the short-sea alternative, see the next edition of Finished Vehicle Logistics.