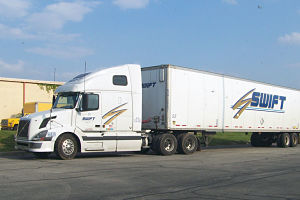 “Knight-Swift is the largest provider of truckload services in North America, with an asset-based fleet of approximately 23,000 tractors and 77,000 trailers, and access to substantial additional capacity through our brokerage and intermodal capabilities,” said group executive chairman Kevin Knight following the merger completion.

When the deal was announced in April, it was 2017’s biggest transaction in the global transport and logistics space by value, according to a PwC report. It was later usurped by the May acquisition by Italy’s Atlantia of Abertis Infraestructuras in Spain.

Based on Knight’s closing share price on April 7th and the net debt of the two companies, the combined group, Knight-Swift Transportation Holdings, has an implied enterprise value of approximately $6 billion. The two companies generated combined revenue of $5.1 billion in 2016, with $416m in adjusted operating income.

The new entity will be headquartered in Phoenix, Arizona, and will employ 28,000 staff.

"The timing of the transaction could not be more favourable for addressing the supply chain, regulatory, and demographic challenges facing our industry, and we are excited to bring to market the capabilities of these two great companies," said Knight.

In its Global Transportation and Logistics Deals Insights report for the second quarter, PWC said the trucking sector posted the highest growth in deal volume, increasing 29% versus the previous quarter. Meanwhile, both shipping and logistics saw their highest volumes of deal activity over the past three years.