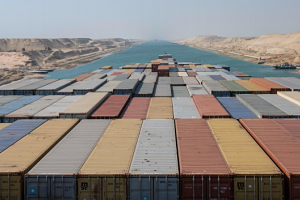 The deal is just the latest in a series announcements reflecting consolidation in the shipping industry, which is suffering from record low rates and overcapacity. Back in August, the collapse of major player Hanjin provided further evidence of the pressures on the shipping sector.

Analysts at investment bank Jefferies estimated that Maersk Line, a subsidiary of the Maersk business conglomerate, paid between $3 billion and $5 billion to buy the German company from family-owned Oetker Group.

Hamburg Süd operates 130 containers vessels with a capacity of 625,000 TEU.

According to Jefferies, the acquisition will add 20% to Maersk Line’s capacity and 26% to revenues, mainly on the north-south trade lanes to Latin America. The deal will raise Maersk’s share of global capacity to 18.6%, from 15.7% previously.

“The acquisition of Hamburg Süd would create value through a potential recovery of container freight rates, following the recent wave of industry consolidation, with market share of the top six lines estimated to surge to 63%,” said a note from the investment bank. This compares to just 51% at the start of 2016.

Maersk Line, which itself hadn’t made a major acquisition in over a decade, announced its intention a few months ago to grow market share both organically and through acquisitions.

The Maersk-Hamburg Süd deal will require numerous competition and regulatory approvals, including from China, Korea, Australia, Brazil and the US, and is not expected to be completed until the end of 2017.