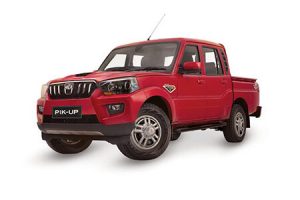 The company’s initial annual production target at the plant, which is located at Dube Tradeport special economic zone, next to the King Shaka Airport, is 2,500 units. It hopes to reach this by July on a single-shift pattern.

Mahindra said the modular design of the facility would easily allow for an increase to 4,000 units a year, including the addition of another model. In addition, Mahindra intends to raise the sourcing of components from local suppliers to 40% by value.

In terms of sales, the vehicle-maker is looking beyond South Africa to the continent as a whole. The company said it already supported the Southern African Customs Union and aimed to grow throughout sub-Saharan Africa, using the Durban factory and South Africa as a base.

“Mahindra has always seen South Africa as a ‘second home’ and a base from which it could grow its market share on the continent,” said Arvind Mathew, head of international operations for Mahindra. “We believe that our investment in an ultra-modern assembly facility and our intention to localise part sourcing over time reaffirm this view.”

Mahindra’s CEO, Rajesh Gupta, said assembly of the Pik-Up was an important step in the company’s long-term plan to increase employment, local sourcing and content, as well as develop the assembly facility.

The vehicle-maker introduced the Pik-Up range in South Africa last October and it has since become the company’s best-selling commercial vehicle. Referring to the country’s term for this type of vehicle, the company added: “Our focus is on the bakkie segment, where Mahindra is now one of the six best-selling brands in South Africa.”

The new assembly plant was constructed in partnership with AIH Logistics, a South African consulting and investment company operating in the automotive and supply chain sectors. AIH also helped Mahindra train the 25 full-time staff employed at the new factory.

Hamish Erskine, CEO of the Dube Tradeport, said the facility would support Mahindra’s growth as the company expands its export reach and widens local sourcing of parts and components.

Mahindra established its first office in South Africa 14 years ago. “In the last five years alone, [the company] has grown its market share by a compound annual growth rate of over 4.6%,” said Gupta. “Much of this growth was achieved in a declining market, which indicates our increased acceptance and popularity in the South Africa market.”