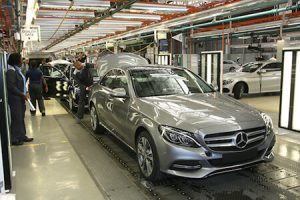 Mercedes-Benz is enlarging its supply chain within South Africa as it expands production at its plant in East London, on the country’s east coast.

The OEM has added 35 new suppliers based in South Africa to the plant’s supply chain, with seven being tier one suppliers and three sequencing suppliers.

“We have committed ourselves to further localise our value chain here in South Africa. We are doing that especially by deepening our cooperation with local partners and suppliers,” a company spokeswoman told Automotive Logistics.

“Local sourcing is one of the key factors in the successful localisation of any product,” she said. “It contributes to the natural hedging effect, and of course there are also important advantages regarding savings, for example on logistics costs. Transportation costs are a significant factor, as are the carrying costs for material on sea containers.”

The plant deals with more than 120 containers a week through standard materials handling equipment with non-automated warehouses.

The German group announced earlier this month it would spend €600m ($703m) on assembly of the next generation of C-Class models at East London. That investment creates a knock-on effect on the viability of increased local content, the spokeswoman said.

A feature of the planned development is construction of two new warehouses, which are required to free up space in the production plant for the expansion.

Factory space for passenger vehicle production will increase by two-thirds and will include new paint and body shops and an upgrade of the assembly shop with the addition of three lines.

The C-Class sedans produced at the 3,300-employee plant are exported to right-hand and left-hand drive markets. The East London factory also produces Mercedes-Benz trucks and buses as well as Fuso brand trucks.