Mercedes-Benz highlights value of localised supply at US plant 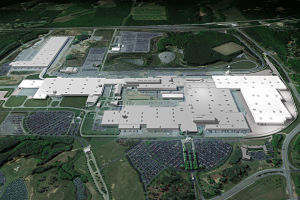 Mercedes-Benz has highlighted the value of a local supply base, following a meeting with its suppiers in Alabama last week.

The Supplier Forum 2017 involved strategic discussions with selected suppliers for the future production programme at the Tuscaloosa plant.

The company has been producing SUV models there since 1997 and it was the first major Mercedes-Benz production plant located outside of Germany. In 2016, more than 300,000 vehicles were built there.

Mercedes said the majority of the 200 US-based suppliers to the plant were international companies that had set up production sites in the country to support it.

“Mercedes-Benz sees value in having more suppliers with locations in Alabama: It increases overall flexibility, improves direct communication between the plant and its suppliers, reduces transport times and optimises manufacturing and logistics costs,” said the company in a statement.

In September 2015, the company announced a $1.3 billion investment to expand SUV production in Alabama, including an upgrade of its logistics and IT systems. The plant is also gearing up to produce the next generation SUVs series model, including plug-in hybrids.

Late last year, it was revealed that the company had decided to switch from one to three logistics service providers at the plant.

During the forum last week, suppliers were also introduced to CASE (Connectivity, Autonomous, Share & Service and Electric Drive), a new strategic focus at the company.

“Each of these trends has the potential to revolutionise the automobile industry,” stated the company.

“Mercedes-Benz Purchasing and Supplier Quality works on incorporating new innovations, software and services such as map data into its products four to five years ahead of customers being able to experience them in a vehicle. Mercedes-Benz also needs its US suppliers to focus on innovation as well,” it added.