Mercedes-Benz starts up industry 4.0-based truck line in Brazil 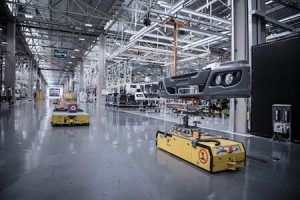 Mercedes-Benz do Brasil has started production on a new truck assembly line at its plant in Sao Bernardo do Campo that uses industry 4.0 technology to raise production line and inbound logistics efficiency. The move follows a three-year investment programme totalling 500m real ($150.6m).

The company said the use of the latest automation technology and data exchange for a more connected manufacturing system had resulted in a 15% improvement in assembly line efficiency and a reduction in the number of parts stores from 53 to six. Storage time for components, meanwhile, has been reduced from 10 days to three.

According to the company, the new assembly line at the plant, which makes its Accelo, Atego, Axor and Actros trucks, is 100% connected with all other areas of production. Workers use smartphone apps on mobile devices to access all relevant data, including data for the 60 or so automated guided vehicles (AGVs) moving parts to the assembly line. The truckmaker also uses forklift trucks equipped with light sensor technology to speed up the flow of materials in parts logistics and 3D printers for the production of certain parts.

Daimler Trucks said it would invest a further 2.4 billion real in updating its truck portfolio, digital services and the modernisation of its two production plants. The company said it would be extending industry 4.0 production concepts to all production processes for all major assemblies, including engines, transmissions and axles, as well as to the manufacture of bus chassis and truck cabs, both at Sao Bernardo do Campo and at Juiz de Fora, which is responsible for welding and painting for all Mercedes-Benz truck cabs made in Brazil as well as for the Actros range.

“We have always believed in the market and continued to invest there,” he said. “We are now opening our completely networked production line in Sao Bernardo do Campo and thereby revolutionising truck manufacturing in Brazil. The new facility also sets standards within the global production network for Mercedes-Benz Trucks. For our customers, this means even more flexibility and efficiency.”

Mercedes-Benz Trucks increased sales in Brazil to 13,400 units last year from 12,100 the year before, giving it a market share of 27.6% in the medium and heavy-duty segment.