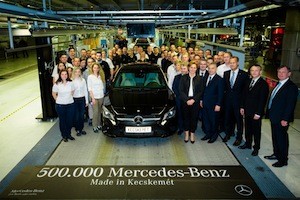 Mercedes-Benz is investing €1 billion ($1.1 billion) in a new assembly plant at Kecskemét in Hungary that will be making front- and rear-wheel drive cars on a more flexible production basis by the end of the decade.

The announcement follows the German carmaker’s decision in April to invest a further €580m to expand capacity at its existing Kecskemét facility (pictured) and build a new generation of compact cars there.

Daimler has already invested around €1 billion in the existing Kecskemét plant, including €800m on its construction. The continued investment in Hungary will add more capacity to Mercedes-Benz’s existing compact production operations in Eastern Europe and further localise the supply chain.

In support of the plan, the company began work earlier this year on a €15m ($16.7m) expansion of the logistics hall at the plant that will support a new supply concept. The company said at the time that the logistics supply processes feeding the Hungarian plant had changed “almost beyond recognition”.

Those processes will now be informed by an “Industry 4.0 benchmark approach” to assembly at the new facility. According to the carmaker, that involves running a convertible factory consisting of networked production systems, a fully digital process chain, the intelligent use of production data and “new models of cooperation between man and machine”.

“We will establish a state-of-the-art and efficient production facility, in which different vehicle architectures will roll off the assembly line flexibly,” said Markus Schäfer, member of the divisional board, Mercedes-Benz Cars, Production and Supply Chain Management. “With this highly modern ‘flex-plant’, we will create additional capacity along with the necessary flexibility according to Industry 4.0 benchmark approaches, allowing us to react quickly and [be more] future-oriented to market needs.”

Currently, the carmaker works with five inbound logistics providers who handle incoming supplies by train or truck, processing of empty containers, sequencing of parts, and shipping of finished vehicles. Those providers, who have not changed since 2013, are Duvenbeck, Kühne+Nagel, Panopa, Lagermax and Rhenus Logistics. It is not yet clear how this set-up may change once the new plant goes into production.

Realigning global logisticsLast year, Mercedes-Benz Cars announced a multi-million euro investment in the realignment of its global logistics organisation that will involve both inbound and outbound flows and incorporate the supply chain management unit within its central production organisation.

Part of this process will be to focus on securing the supply of materials across global production networks, according to the company, as well as reducing inventory and ensuring timely delivery of vehicles to customers.

Daimler has now increased the number of production material suppliers in Hungary to 25 since the start of CLA production at the Kecskemét plant, up from 17 since production of the B-Class started there. The remainder of its suppliers are based mainly in Germany and wider western and eastern Europe.

On the outbound side, the company is building a network hub in the Adriatic, from which it will ship vehicles to Asia, including from the port of Koper in Slovenia.