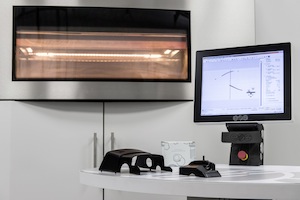 Mercedes-Benz Trucks is to move to 3D printing as the standard production method for a number of plastic spare parts at its Customer Services and Parts division from September.

The truckmaker said the technology would initially be used for 30 part lines but that this would increase. It added that in addition to being an environmentally friendly option, printing parts on demand would save on warehousing costs and improve parts availability, even for models that were no longer in production.

“The challenge in the spare parts business lies in securing supply even for model series which are no longer produced,” a spokesperson for the company told Automotive Logistics. “This means that the range also includes spare parts for which there is only a low demand in small quantities every year. Producing them is thus increasingly uneconomical for suppliers – production facilities and tools often have to be retained and maintained for years.”

The company did not reveal the number of spare parts it produced per month or how much it had invested in the technology, but it is using the latest 3D SLS printing processes to make the parts.

Andreas Deuschle, head of marketing and operations in the Customer Services and Parts division, said 3D printing offered many more possibilities than conventional production, which was why the company would be rapidly extending the application of the technology.

According to the truckmaker, the short time taken to print spare parts once an order is received will considerably speed up production and supply.

For more on the use of 3D printing for spare parts, click here.