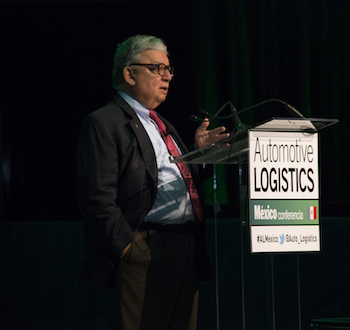 The past week has seen tensions escalate between the US and Mexico over trade terms, with a number of tariff and tax proposals suggested by the administration of Donald Trump that would have significant impacts on the automotive supply chain, both in North America and globally.

However, while the administration rolled back on some tariff threats, the US-Mexico Chamber of Commerce, an influential trade relations group, has predicted that neither blanket import tariffs, nor withdrawal from the North American Free Trade Agreement (Nafta), would be the end result of any renegotiation.

“When you hear discussion during the campaign and also in the media about a redo of Nafta, or taking it down, that is not happening,” said Albert Zapata (pictured), president and CEO of the US-Mexico Chamber of Commerce, at the 2017 Automotive Logistics Mexico conference in Mexico City today (February 1st).

“I’ll make a bold prediction and say that I don’t think there will be a wholesale 20% tax at the border. President Trump loves to negotiate, so he throws down at the start of the discussion, and then you get into the options,” he added.

Zapanta, whose organisation plays an important role in facilitating various trade, business and logistics initiatives between the US and Mexico, said that he did not speak officially for either the Trump administration or that of Mexican president, Enrique Peña Nieto. He has, however, met with both men, including with Donald Trump while he was president-elect.

Zapanta pointed out that, despite the cancellation of the meeting last week between the two presidents, an important meeting did take place in Washington DC, which he suggested was an important start to meaningful reforms. The meeting included Ildefenso Guajardo, the Mexican minister of the economy and a key player in Nafta agreements in the 1990s, as well as the Mexican foreign secretary, together with the US vice-president, Mike Pence, and other key officials and advisors, including the chief of staff, Reince Priebus, and the head of the National Trade Council, Peter Navarro, who will play a key role in Nafta discussions.

“Nothing definitive has come out of that discussion. However, there will be more discussion, including once Wilbur Ross is officially confirmed as US secretary of commerce,” he said.

“The Mexicans representatives are good. You’ve got a negotiator head of the economy who is the real point man,” he continued.

Zapanta suggested that while Nafta was not wholly to blame for a loss of jobs in the US over the past 20 years, there was scope to improve the agreement, including in areas such as security and technology, as well as in agriculture and the energy trade.

Trump and tradeLast week, following disputes over who would pay for a border wall between the US and Mexico, Sean Spicer, the White House press secretary, suggested that a 20% import tariff on all Mexican products would cover the costs. Spicer also indicated that the tariff could eventually be extended to imports from all countries.

The White House later clarified that this was just one proposal being considered among many. Another is a radical new tax system called the ‘border adjustment tax’. Under this system, imported inventory and goods would no longer be tax-deductible from the cost of doing business, while exports from the US would be excluded from taxable income. It also proposes the reduction of corporate income tax to 20% of income from 35% previously.

The impact of such a proposal would work effectively as a 20% tax on all imported products, including car parts and finished vehicles.

Peter Navarro also suggested it as an option in an interview with the Financial Times this week, stating: “President Trump promised during the campaign he would put an end to this unfair treatment of our income tax, and the House border adjustment proposal offers one possible option among several.”

Navarro also described a “need” for the US to repatriate supply chains: “It does the American economy no long-term good to only keep the big box factories where we are now assembling ‘American’ products composed primarily of foreign components,” he said. “We need to manufacture those components in a robust domestic supply chain that will spur job and wage growth.”

Speaking on the topic recently, Alan Auerbach, a University of California, Berkeley professor of economics and law, told CNBC: “I think it is a simpler tax system; it is one that gets rid of all the problems that we have now with multi-national corporation tax avoidance and it encourages companies to locate production in the United States.”

However, the proposal has caused worries among major companies in the US who rely on imports, including large retailers like Walmart and some major carmakers. Toyota, for example, is urging its US dealers to challenge lawmakers in the country over the border adjustment tax, stating that it would seriously hurt car buyers, according to a report by Reuters.

Toyota sent an urgent message to its 1,500 strong dealer network urging them to contact politicians and explain that such a tax would be detrimental for customers. 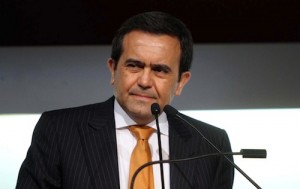 Despite the two presidents cancelling their meeting, Mexican minister of the economy Ildefonso Guajardo (above) has met senior US figures including vice-president Mike Pence recently

The call by Toyota to its dealers reveals concern among a number of carmakers importing vehicles to the US that the government's policies could affect their sales and profits, making them uncompetitive with rivals more reliant on US-made products, according to Reuters.

Private sector influenceAl Zapanta, however, suggested that a 20% tax or tariff for automotive products would be difficult or unworkable, especially for supply chains in which car parts could cross the US-Mexico border up to nine times. “The customer would ultimately pay the price of that,” he said.

He suggested that the Trump administration would be listening carefully to private companies, including from the automotive industry, in deciding the final agreements.