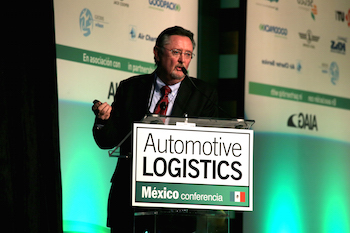 Executives from carmakers used the Automotive Logistics Mexico conference, held in Mexico City, to voice their concerns about whether the country’s ports were going to be able to handle the sharp increase in trade for the automotive industry. The port is close to full capacity and suffers from infrastructure constraints, as well as weather disruptions and damage issues.

Alejandro Couttolenc, head of commercialisation at the port of Veracruz (pictured left), did his best to allay concerns.

The port of Veracruz is Mexico’s busiest automotive port, accounting for more than 60% of volumes handled in and out of Mexico. In 2014, the port handled 680,325 units, including 476,613 exports. The volume actually represents overall drops over the past three years, from a peak of 875,794 units and 689,175 exports in 2012. “The fall in volume has been a result in a drop in the markets and Mexican exports to South America, including Brazil and Argentina.”

However, finished vehicles only represent 5% of volume at the port and increases in overall cargo and shipping have put pressure on Veracruz’s handling capacity and inland connections. Couttolenc recognised the need to increase efficiency through the development of port infrastructure with a focus on better connections with the wider intermodal network. He outlined a number of measures being addressed that would accommodate increased vehicle handling, improved rail access and facilities for road haulage.

Couttolenc revealed that Veracruz has recently finished a logistics hub with a capacity for 150 trucks, with automated access using gate scanners to save time. It can also handle up to 153 double stack rail wagons.

Priority containerised shipments can now be handled in 24 hours thanks to better collaboration with the customs services. There is a tax-free storage zone and goods can stay for up to six months. Couttolenc also revealed that the port had plans to develop an area 5km inland of the port for logistics activities.

However, Veracruz has restrictions on the size of the vessels calling there, with a maximum length of 325m possible. This means it cannot accommodate the new Post-Panamax vessels that container and ro-ro lines are now introducing. To do so, Couttolenc announced that there were plans to develop a new terminal by 2018 that would draw $16m in public investment, with a further $8m provided by private finance.

There are also issues with rail access because the main line has to move through Veracruz city, which hampers the velocity of shipments. However, plans are now underway to develop a separate rail line that will traverse north of the city and down the coast directly to the terminals.

However, the carmakers at the conference were more interested in exactly when the proposed improvements would transpire. Ivan Hernandez, director of transportation in North America for Daimler, wanted to know just how fast Veracruz was working on expanding its facilities. The carmaker is building a joint venture production plant with Nissan to build Mercedes-Benz vehicles, and is targeting the port as its main point of sea access to and from the country.

“We want to ship units via Veracruz, are you going to be ready when we are?” asked Hernandez.

Couttolenc said that he “expected” the port to be ready in time, which was perhaps not the total assurance Daimler was looking for.

“We are working on the necessary infrastructure to accommodate it,” he said, adding that all transport modes needed to work together to avoid storage problems, with the speed of rail as important as the ability of vessels to reduce their loading times.

“We are trying to implement extra shifts to handle vehicles, including with night loading,” said Couttolenc. “We have a platform to coordinate with the assembly companies and have schedule reports from them so we know about the arrival and departure of cargo.”

Couttolenc admitted that sometimes ro-ro vessels have to wait; he expected improved operations with the expansion of a new terminal by 2018.

Ford Mexico’s director of MP&L, Rafael Lopez said the company had a good relationship with Veracruz and hoped that the port would guarantee further investment in the infrastructure there. However, he added that the carmaker was looking for more ports to be developed.

“We have plans to increase production and then we will be looking at other ports with better transit times,” said Lopez. “We need more ports and we need more flexibility.

He added that the ports needed to build in more value-added services to take advantage of the time that vehicles were waiting for onward shipment. “The supply chain should contain opportunities for adding value,” he noted.

One other issue affecting car movements through Veracruz relates to the level of salinity in the air, which can cause damage to body work if vehicles are held in the port for too long. It is something that Ford has experienced if its vehicles are held there for longer than six days.

“We have had problems with some brands in the past,” admitted Couttolenc, but he added that that had also had to do with quality of car. Last year there were no complaints. 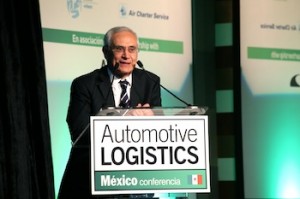 “If the OEM leaves vehicles there for 20 days then there will be issues but the faster we handle them the less chance there is for these problems,” said Couttolenc. “That is why we are working on the scheduling with the OEMs.”

He pointed to the construction of a covered storage facility but said that private investment would be the only way to make this possible.

“That is expensive and the port authority won’t pay it but there is private investment interest in this,” he said.