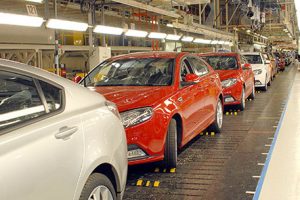 MG Motor UK is to cease final assembly of cars later this year at Longbridge, in the UK, after parent company SAIC Motor decided to move the operation to China.

In a statement issued on Friday (September 23rd) MG said the decision had been taken as part of a strategic UK business review and to concentrate on growing sales volumes, streamlining costs and centralising global distribution processes.

Matthew Cheyne, head of sales and marketing at MG Motor UK, commented: “With efficiency and flexibility both key to long-term market success, off-shoring vehicle production is a necessary business decision.

“Relocating to state-of-the-art overseas production facilities will allow faster access to product and help to meet ever-increasing customer demand, all while maintaining the highest levels of production quality. In addition, improving production scale efficiencies will support ongoing sales growth in the UK market – a key priority.

“We have been in discussion with government representatives on a local and national level to explore alternative solutions moving forward. We will continue to do so during this period of consultation and will work with all parties to find the best outcomes for those people likely to be affected within the company," he added.

A spokesman for the OEM told Automotive Logistics around 25 people were involved in final assembly at Longbridge and stressed that vehicles arriving from China for final assembly there required only very minor work to complete. The decision, he said, had been taken “to streamline manufacturing and ensure economies of scale globally”.

MG’s Chinese parent had simply “decided it was a bit disjointed to do 99% in one location and ship cars to the UK where they’d almost just be tinkered with”, he added.

The spokesman was unable to say exactly when the shift would take place but underlined that Longbridge’s future as an R&D centre for SAIC, employing around 400, remained unchanged.

SAIC acquired MG in 2007 after taking over Nanjing Automobile, which bought MG Rover following the UK automaker’s collapse in 2005. Production at the Longbridge plant, once the biggest in Britain's automotive industry, restarted in 2011, but was only a small assembly operation with most of the vehicle built in China.

Sales of MG brand vehicles in the UK were 2,300 units through August, according to the SMMT, a rise of nearly 18% compared to 2015.