A prominent UK government minister and the Society for Motor Manufacturers and Traders (SMMT) were among those that this week called for interim arrangements to be put in place after the two-year Brexit negotiation deadline, as the chances of a new trade deal being in place by then seemed unlikely they said. 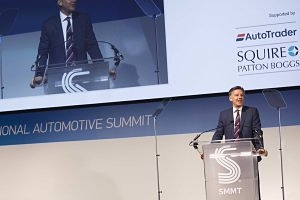 Mike Hawes, chief executive of the SMMT, said that if the UK cannot secure a comprehensive new relationship with the EU in two years’ time it needed a back-up plan

UK government officials and their EU counterparts met for the first time this week to discuss the sequencing of the complicated negotiation process for the UK to leave the economic bloc by April 2019.

In a speech in January the UK prime minister, Theresa May, said that while it was in no-one’s interest for there to be a “cliff-edge” for business, the country would not seek “some form of unlimited transitional status” to alleviate this, describing it as “some kind of permanent political purgatory” that would do no good for either party.

However, on Tuesday this week, Philip Hammond, the UK’s chancellor of the exchequer, made a speech in London in which he called for an implementation period where current customs border arrangements remained in place, until new long-term arrangements are up and running.

Hammond said he was confident that a Brexit deal could be reached that, amongst other things, “achieves early agreement on transitional arrangements, so that trade can carry on flowing smoothly, and businesses up and down the country can move on with investment decisions that they want to make, but that have been on hold since the referendum.”

He also called for ‘frictionless customs arrangements’ between the two regions to facilitate trade across the various borders.

Muddying the watersThat seeming disparity at the heart of the government responsible for negotiating the UK’s exit from the EU was made more stark following the general election in the UK on June 8th, which saw the Conservative party take more seats than Labour but without a parliamentary majority, resulting in a hung parliament. There is now a real risk that an unstable UK government may be unable to come to agreement over Brexit, increasing the potential of leaving the EU without an agreement in place, which could do real damage to the UK economy and its automotive sector.

The result could influence the government’s original intention to leave the single market, as laid out in its campaign manifesto. It is now unclear whether Theresa May would even have the authority in her own government to push through the legislation required to change policy on trade regulations and deals.

That lack of clarity is causing many across the automotive sector to call for a contingency plan.

Speaking at a press briefing, also on Tuesday morning, Mike Hawes, chief executive of the SMMT, which represents the country’s automotive industry, said: “If the UK cannot secure – and implement – a bespoke and comprehensive new relationship with the EU in two years’ time, we need a back-up plan.

“Having looked at all the alternatives, we need government to seek an interim arrangement whereby we stay within the single market and customs union until that new relationship is implemented.”

Earlier this year, at a Freight Transport Association (FTA) event in London, Professor Jim Rollo, deputy director at the UK Trade Policy Observatory at Sussex University, made similar comments regarding the likelihood of any deal being done by March 2019.

Meanwhile, in its own Brexit Manifesto, the FTA also called for transitional trade measures that “will help to ensure that the transition towards a post-Brexit UK is as seamless as possible”.

“I do want us to have a customs agreement with the EU,” she said. “Whether that means we must reach a completely new customs agreement, become an associate member of the Customs Union in some way, or remain a signatory to some elements of it, I hold no preconceived position.”

Speaking at the SMMT’s International Automotive Summit this week, Ian Howells, senior vice-president of Honda Europe warned of the potential negative impact of the UK leaving the Customs Union and argued that the government should try to remain a part of it.

“The more we dig into the detail of what leaving the Customs Union, following Brexit, would mean, the more complexity we discover, both in terms of imposing additional costs and friction for our business, as well as creating complex regulatory challenges for civil servants and business alike,” said Howells.

He went on to describe some of the more specific supply chain details for parts coming into Honda’s Swindon manufacturing plant where it operates a highly efficient just-in-time manufacturing process.

These included the delivery of 2m components daily; with 350 lorries delivering EU sourced parts. The facility holds only half a days worth of UK and EU sourced components.

“Given this very finely balanced system, disruption to the flow of goods to the factory could interrupt our ability to continue to produce cars at Swindon.”

Honda employs 4,000 people at its Swindon plant, which manufactures cars for the local market and for export. It is the global production hub for the Honda Civic.

Exports to the US started last summer and in 2017, 50% of output will be shipped there. This summer, the Civic models produced at the plant will also start to be exported to Japan.

Howells said remaining in the Customs Union post Brexit would also mean avoiding significant risks, including the implementation of the UK’s Customs Declaration Service (CDS) currently being implemented to replace an older system but already said to be behind schedule.

Bronwen Maddox, director at the Institute for Government, told delegates she was more sceptical about the country remaining in the Customs Union given the deal currently in place between Turkey and Europe.

“It is very asymmetrical,” said Maddox. “If the EU does a free trade agreement with another country, South Korea for example, then South Korea gets access to the EU and Turkey’s markets, but Turkey didn’t sign that deal and it doesn’t get access, on those terms, to the South Korean market. And the more free trade agreements the EU signs, the worse that position gets for them.”

“What we would want to ask for specifically is to see if we could get access to the EU’s free trade agreements,” said Maddox.

Wider concerns for tariff-free accessThe concerns that UK-based carmakers have about the possible imposition of tariffs for parts and vehicles if they were left out of the Customs Union and the Single Market were shared by major representative bodies in the UK. They have joined to call for continued access to the European single market until a final deal is done between the UK and the EU.

The British Chambers of Commerce, Confederation of British Industry, EEF, Federation of Small Businesses and Institute of Directors sent a joint letter to the UK government’s business secretary Greg Clark calling for a final trade deal that would allow tariff-free goods to be traded between the UK and the EU.

In March the EEF, which is the UK’s largest manufacturing lobby, warned the government that manufacturers would suffer significantly in the event of reverting to WTO terms. “The idea of being able to walk away empty-handed might be a negotiating tactic, but it would in reality deliver a risky and expensive blow,” said Terry Sculoer, chief executive of EEF.