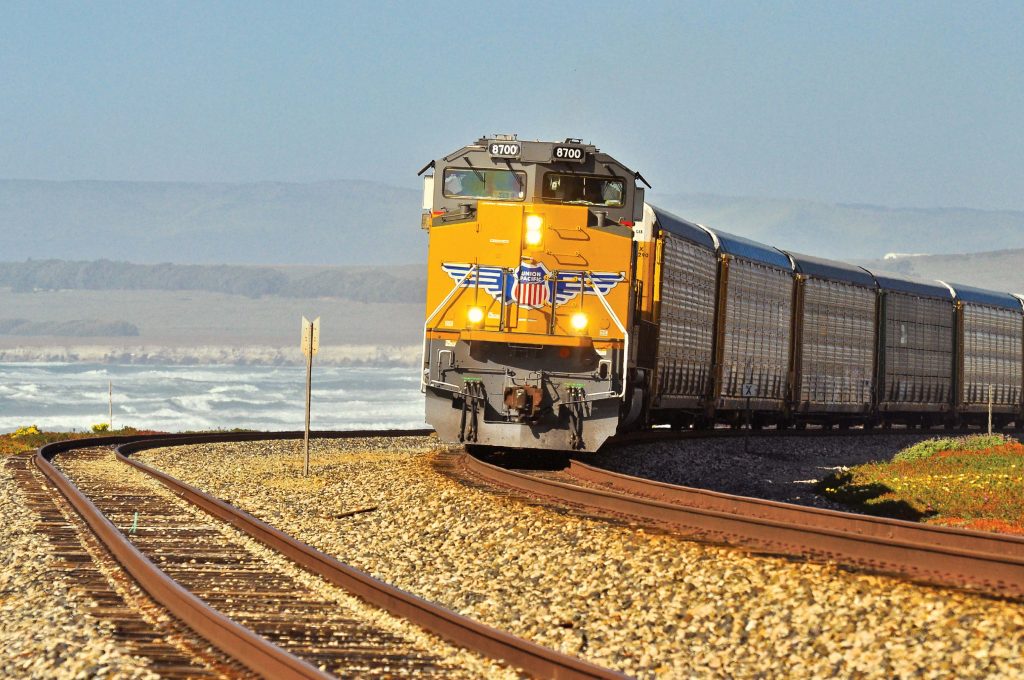 Against the backdrop of a recent rise in ground count and decrease in overall velocity, rail operators and equipment suppliers must innovate and invest to meet carmaker’s demands. Anthony Coia and Christopher Ludwig report.

North America remains the world’s most dynamic and important market for vehicle logistics by rail. Although the numbers vary by carmaker and location, most experts estimate that around 70% of vehicles on the continent use the railways at some point during their journey, and probably for the vast majority of transport miles. In China, the world’s largest car market, rail accounts for just 7% of vehicle transport.

Rail also remains the great connector of the NAFTA region. Unlike Europe, which still struggles to manage rail flows across borders with different national operators, varying operating rules, and even different sized gauges, the US, Canada and Mexico share a relatively common infrastructure and supply of railcars across companies and countries.

None of these dynamics has changed radically over the past decade. Indeed, while crossing borders is by no means easy or without its inefficiencies, it is the railways that have facilitated much of the vehicle production and export growth out of Mexico, where most plants benefit from daily shipments north of the border.

However, vehicle logistics by rail in North America has faced significant challenges. It is not simply a matter of railcar shortages, although there are signs of some (from 2005-2007, OEM executives often complained about shortages in supply as well, see survey on p28). The real issues have been concerning velocity and ‘cycle time’ (the amount of time to reposition and reload equipment). After making some notable gains in velocity in 2013, the sector has hit a snag over the past two years. The ‘polar vortex’ in the winter of 2014, combined with a boom in other commodities like gas and coal, disrupted flows of vehicles on an almost unprecedented scale, leading to a surge in the ‘ground count’ of vehicles waiting to shipped.

While the ground count has come down since its peak in late spring 2014, it remains at historically high levels. David Sellers, assistant vice-president of automotive for TTX Company, which is responsible for the railcar pool, reveals that the average number of vehicles waiting to be loaded at one time was 76,783 in 2007, but is 126,840 this year.

The reasons for this rise in ground count and decrease in overall velocity are varied. The past decade presented tremendous ebbs and flows in vehicle shipment volumes, first during the highs of US volume in the years prior to the worldwide recession. Today, with the US sales recovery still in force and Mexican output set to rise to 5m units by the end of the decade, demand is higher and more complex. Yet, unlike the trucking industry, the railways’ fixed infrastructure and lower elasticity means that it is not as agile to respond to changes in demand as the trucking sector.

On some levels, it is a question of supply and infrastructure. Jan Bures, executive vice-president of group aftersales and services for Volkswagen Group of America, says the economic crisis led railways to scale down equipment and tracks. “Rail infrastructure has not grown with market demand,” he notes. A number of other executives in North America, including from GM, FCA and Nissan, also pointed to shortages over the past decade. 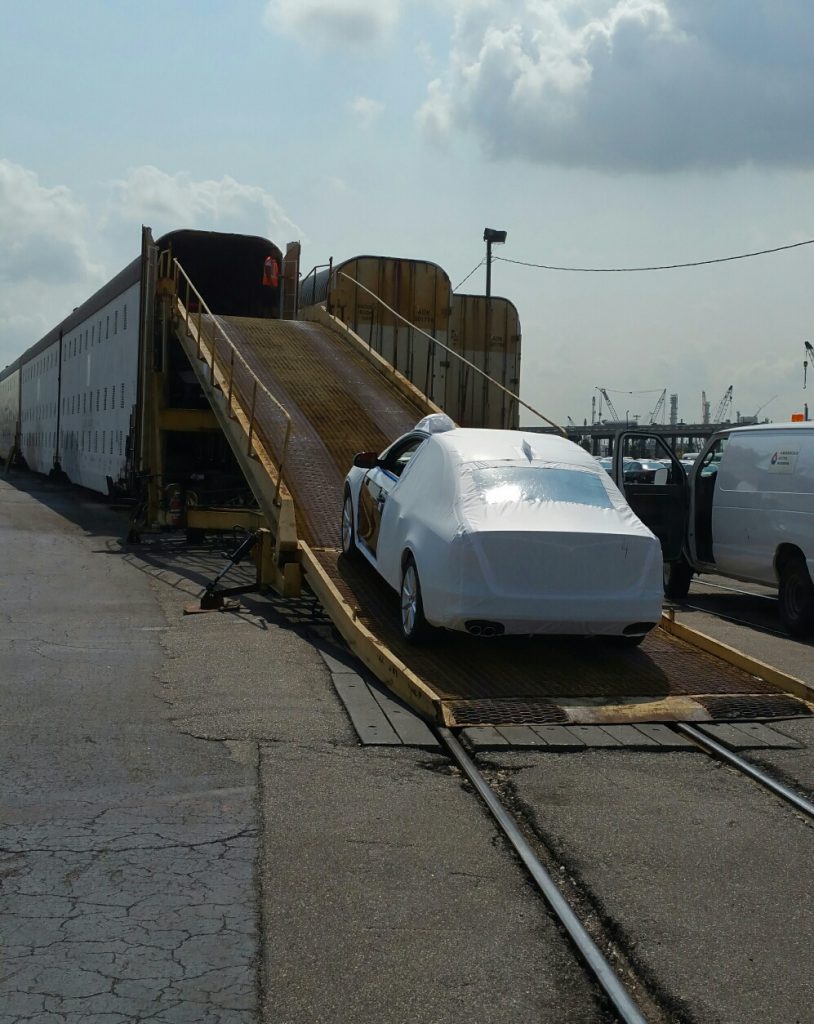 The railcar fleet does show some signs of decreases in capacity. According to Jason Kuehn, vice-president of the surface transportation practice at consulting firm Oliver Wyman, the number of automotive railcars across North America as of 2014, was about 57,113 units, around 200 less than it was in 2005.” Figures from TTX vary slightly, suggesting that stronger investment in the fleet over the past 2-3 years has brought the current fleet to higher levels than ten years ago (see table below). Railyard locations, however, have dropped more substantially, including an 18% decrease in the number of loading yards.

In many ways, these fleet and network numbers make sense; US vehicle sales are only this year expected to reach or surpass the peaks seen a decade ago, following the huge drops during the recession. Meanwhile, the Midwest especially saw a large number of plant closures before and after the crisis, with production more concentrated in fewer locations than in the past, which could explain the decline in loading yards.

However, there does appear to have been a decrease in railcar loading over the past decade, with Oliver Wyman figures suggesting a drop of around 30% (from 1.78m loads in 2005 to 1.18m loads in 2014). TTX estimates a lower, but still steep, 13% drop (1.36m to 1.18m), with the number of average loads made by each railcar falling.

To understand this dynamic, you have to look more closely at changes across North American production. Union Pacific Railroad’s Linda Brandl, vice-president and general manager for automotive, notes rises across the US Midwest and south-east in recent years, and notably in Mexico.

Jason Kuehn says that shipping by rail from Mexican plants has been more challenging than from the US south, although this is not so much to do with infrastructure or supply. “Mexican rail is well enough developed. The challenge is not due to a lack of capacity but rather operational issues,” he says.

While Mexican rail processes can be improved, the big issue affecting railcar utilisation rates seems to be around trading patterns, says Kuehn. “This is because there are fewer backloads – almost no vehicles are going to Mexico [from the US and Canada],” he says.

Other changes that have impacted utilisation include the decline of Japanese imports to the US, which has reduced the number of railcars needed on the west coast. David Sellers at TTX notes that since relatively few vehicle shipments are sent southbound to Mexico, empty railcars that otherwise could be sourced from the California pool need to be hauled from further distances to get enough supply south of the border to Mexican plants.

The balance between bi-level and tri-level railcars has been a challenge for many. While the industry found itself short of tri-levels in the run-up to and after the financial crisis, recent shifts back towards SUVs, following lower gasoline prices, have once again changed the balance towards bi-levels, points out David Sellers.

Norfolk Southern’s Richard Kiley adds that the growth in Mexico has pulled more tri-levels south of the border. “Because of the increase in Mexican production, the resulting longer transit times have affected tri-level railcars much more than bi-levels, since most of the vehicles produced in Mexico are smaller vehicles,” he says. “The need to convert bi-level railcars to tri-levels and back to allow for fewer empty miles in the North American network is something to consider as we move forward.”

An example of how this backhaul issue has impacted carmakers is found at the Volkswagen Group of America, which has long used a mix of rail and short-sea shipping out of Mexico. As the carmaker has increased its overall rail usage in North America over the past decade, including higher output from Mexico and from its plant in Tennessee (which opened in 2011), it has faced issues in rail capacity, according to Mark Boucher, senior manager of port operations and metrics. With its volume set to rise from Audi’s new plant in Mexico next year, the issue could get worse. 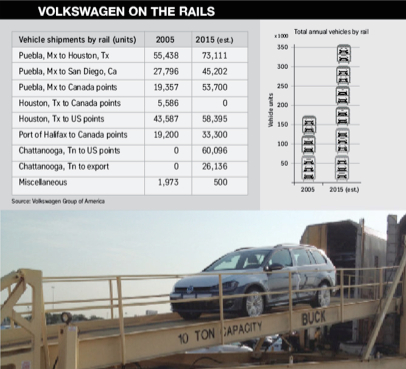 “We ship high volumes from Mexico. Since these rail hauls to the United States and Canada are longer, we need more equipment,” he says. “The tri-level supply is critically short, so we must use bi-levels, which are less cost-effective. The railcar shortage means that we need to ship by ocean vessel.”

In recent years, since more Mexican capacity has come online, there have also been increases in the number of short-sea shipments from Mexico that might otherwise have moved by rail – particularly for serving the US east coast. While exact numbers are not available, sources at shipping lines suggest the proportion of vehicles moving by short-sea versus rail has shifted from around 20% of northbound exports just a few years ago, to closer to 30% today.

While railways still face velocity and repositioning challenges, the past decade has seen much progress in dealing with rising network complexity. Railcar convertibility has been among the key developments. David Sellers notes that about two years ago, the industry introduced adjustable multi-level railcars, led by Union Pacific, that are transformable from bi-level to tri-level with a one-day lead-time. 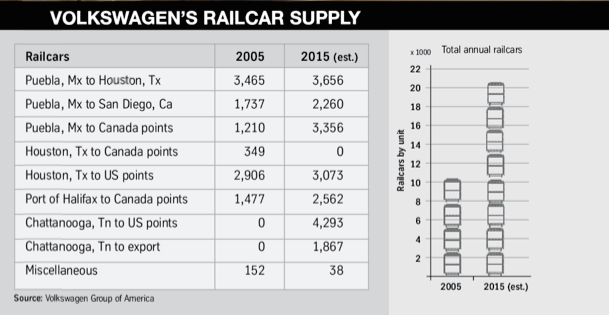 Prior to the UP railcar, a number of carmakers were also using Greenbrier’s Automax railcars, which have higher capacity and can also be reconfigured between two or three levels. Mark Boucher admits that since Volkswagen uses Automax railcars heavily on dedicated lanes, it has been insulated somewhat from the railcar shortage. Along with Volkswagen, American Honda also uses Automax equipment.

As the need for convertible equipment increases, Sellers believes that technology will change to make it easier to convert railcars to bi-levels or tri-levels as needed, particularly as current conversions require at least a day’s worth of specialised labour or more. “The length of time to convert the railcar is the current issue; using a dedicated shop instead of a preparation facility to accomplish the work is less efficient,” says Sellers.

As volume demand intensifies, railways are focusing more on certain types of operational changes. Sellers predicts that advancements in chock design will also make it easier to use the same chocks to handle either bi-level- or tri-level-shipped vehicles. He also points to a greater focus on train scheduling. “Velocity challenges have pushed the railroads to look at running bypass trains that avoid congested terminals, and day-of-week loading for block trains that are longer and thus more efficient than previous ones,” he says. 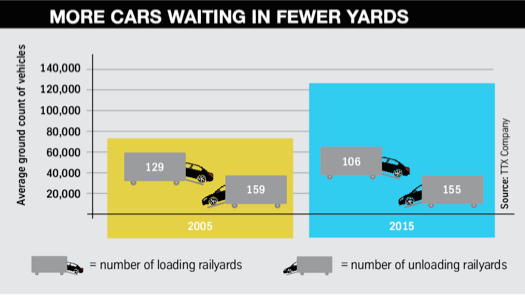 Other important changes in recent years include a new, equity-based model for distributing railcars across the network. Richard Kiley says these rules, which the MPEC introduced, ensure each member railway has adequate multi-level capacity for the allocation of the fleet.

Kiley also points to technical adjustments and investments across the network. “As railroads clear the last height obstructions in their networks, the 20ft, 2-inch (6.15-metre) height railcar may also gain acceptance, which would enable more flexibility in the types of vehicles that can be transported,” he says.

Railways are also making investments in fleets, adding tracks and increasing capacity at important railyards, including close to the US-Mexican border. However, Jason Kuehn points out that adding railcars does not necessarily increase capacity, as it can also lead to bottlenecks and traffic. New processes around flexibility and supply, whether in engineering more backloads or flexible equipment, are likely to become even more important over the next decade. And that will be vital, since the role that rail will play for vehicle distribution in North America is unlikely to diminish.