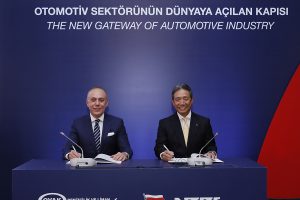 Turkish conglomerate Oyak has set up a joint venture with Japan’s NYK Line to invest a combined $110m in a new finished vehicle terminal at Yarimca port in Turkey’s Kocaeli region.

The facility will have a yard area covering 180,000 sq.m, with enough storage for 8,000 units, and provide pre-delivery inspection (PDI) services. It is expected to have an initial annual capacity for 780,000 vehicles, which if met would make it one of the top 10 European vehicle handling ports.

According to figures from OSD, Turkey’s Automotive Manufacturers Association, total vehicle exports for February hit 119,604, up 3% on the same month last year, though passenger cars saw drop of 10% based on a comparison with February 2017. However, year-on-year, passenger car exports have seen a 17% increase with 918,270 exported so far. Meanwhile, the Uludağ Automotive Industry Exporters Association (OIB) said there had been a 24% increase in vehicle shipments in March.

Erdemir confirmed that existing production and export capacity in the sector had been a significant driver in the investment decision.

If the proposed construction schedule is met, the port will become operational in 2019 and be the the first large terminal located near Istanbul and dedicated to finished vehicles.

Koichi Chikaraishi, NYK Automotive Group president (pictured right), stressed his company was delighted to be part of the investment, which he anticipated forming part of a long-term cooperation. He added that the shipping line is committed to integrating its logistics services, which could also be offered to other sectors outside the automotive business.

NYK will participate in the construction of the terminal said the company in statement.