Officials on both sides of the US and Mexican border have diverted traffic and had partially opened the World Trade International bridge just days after a storm caused significant damages at the vitally important Laredo crossing and forced authorities to stop operations. 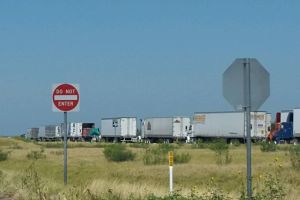 On Thursday, officials at the Laredo Police Department said the line at the Colombia crossing was about a quarter mile long and that traffic was flowing “efficiently”

The 14-lane World Trade Bridge one of four entry points at the border crossing, where the Rio Grande River separates the Texan city of Laredo and Nuevo Laredo on the Mexican side of the border. It was the only entry point that was closed following the storm on May 21.

On the Mexican side of the border there were similar damages, while access to the bridge was blocked due to the collapse of electricity poles and advertisement billboards.

BY Thursday, May 25th, four lanes had been restored to start activities for imports by companies certified in Mexico and for operations including, among others, meat, food and perishables.

The US Customs & Border Protection agency said it had also re-established FAST C-TPAT processing at the World Trade Bridge with the exception of medical and perishable merchandise.

Commercial traffic was also being rerouted via the nearby Colombia-Solidarity Bridge border post until the World Trade Bridge was fully operational again. It was used for commercial traffic going in both directions and extended its operating hours.

The Laredo crossing is the busiest for trucks entering the US with 12,000 passing through daily. Half of all truck traffic crossing into Texas from Mexico – passed through Laredo in 2015.

It is also a vital artery for the North American automotive industry, serving as the main route for cars and automotive parts travelling between the two countries.