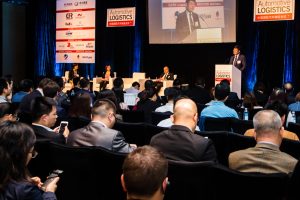 China is committed to opening its market to global competition, as shown by the announcement last week that it will lower import tariffs and remove a two-decade old regulation restricting foreign carmakers to making cars there only as part of a joint venture with a Chinese company. And according to speakers at this week's Automotive Logistics China conference, the opportunities for the increasingly sophisticated and high-tech domestic market are as good as those for carmakers, including VW and Tesla, which will be able to hold more than 50% of local ventures.

“Within five years, full equity restrictions will be lifted and China's automotive market will open to global competition, which is an opportunity for the country and for the industry as a whole,” said Cai Jin, vice-president of the China Federation of Logistics and Purchasing, on the first day of the conference in Chengdu (pictured).

For those making electric cars, such as Tesla, the previous restrictions are being lifted even sooner as China seeks to take a leading position in the development of cleaner mobility.

China has the biggest car market in the world and is expected to make 25.3m vehicles this year. Chengdu itself has 4.5m vehicles driving around, making it the second largest in China for vehicle numbers, behind Beijing. Overall the economy has settled into a period of steady growth with its GDP increasing 6% annually and likely to stay around that level until 2020 – though the first quarter of this year exceeded expectations at 6.8%.

The automotive industry is growing in line with that first quarter rate at 6-7%, a hard-won result given the increase in the purchase tax rate from 7.4% to 10%, according to Huang Yumei, vice-director of the Information Resources Development Department at China's State Information Centre.

However, that growth rate could be affected this year if the looming trade war between China and the US takes full effect. What is more, Huang said, bank loans issued in the first quarter to stimulate growth would not be maintained for the whole year and the cancellation of the preferential purchasing tax could be a big disadvantage in 2018, especially for the car market where it might lead to a drop in sales of 500,000 vehicles. Nevertheless, passenger cars account for 12% of total consumer goods and further growth is expected as the population moves out to rural areas and away from urban centres with public transport networks.

[mpu_ad]The number of vehicles sold in China that are driven by alternative propulsion, including electric vehicles, doubled last year compared to 2016. In fact, with respect to EVs alone, the rate of growth is higher at 150%, said Cai, describing the sustained growth in that market as “an irresistible trend”.

There could also be benefits for the logistics sector, with new energy technology promising to relieve the downward profitability of some traditional service providers by providing more cost-efficient and environmentally friendly options for delivery. That includes those into city centres, a number of which have banned polluting trucks – something of note for dealership deliveries.

However, advances in automotive technology are not restricted to the drivetrain and the connected car is increasingly becoming integrated with other technology sectors in a megatrend that Cai identified as “the internet of cars”.

That innovation is also being felt in the logistics industry, which is supporting the manufacture of vehicles that will soon be autonomous – something the Chinese government is encouraging.

There is already evidence of that under the One Belt, One Road economic and trade plan, which is designed to boost infrastructure and trade links with Europe, Central Asia and Africa, including overland road and rail between Europe and Asia and stronger maritime links with South-East Asia, Oceania and North Africa. Direct rail links between China and Europe, taking parts and cars in either direction, have taken off over the last five years, with 8,000 now running, and they look set to increase still further.