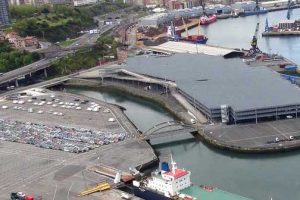 The port authority controlling the Spanish port of Pasaia (Pasajes) in the northern Basque region has agreed to extend the concession held there by short sea services provider UECC and Spanish maritime, logistics and port services provider Noatum Maritime.

According to the latest agreement, UECC and Noatum will continue to operate the terminal for finished vehicles for a period of 35 years. The terminal operations cover an area of more than 11 hectares and include a vehicle storage location.

The Pasaia car terminal handled almost 220,300 finished vehicles between January and November 2017. That compared to 254,700 ro-ro units, including finished vehicles, during 2016, of which 85% were for export to other European countries including the UK, Belgium, Germany, the Netherlands and Scandinavia. Finished vehicle traffic accounts for just over 7% of the total traffic moved through the port.

Citing findings by Spain’s vehicle makers association, Anfac, UECC said the port’s main strengths were flexibility in the service and its accessibility by rail and road, as well as being strategically located near the French border and main highways. In 2016, the port began handling imported Honda vehicles from the UK for distribution in France.

Last month, Noatum Maritime consolidated its position in Spain’s finished vehicle and ro-ro market with the integration of its vehicle handling business at the port of Pasaia with those of Tarragona, Barcelona, Sagunto, Málaga and Santander.