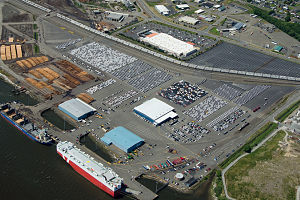 Pasha Automotive Services has secured a contract starting this summer to process Fiat Chrysler Automobiles (FCA) finished vehicles imported into Grays Harbor, on the US west coast, from the port of Lázaro Cárdenas in Mexico.

John Pasha, senior vice-president of Pasha Automotive Services, said: “FCA US has been a long-time customer, and it is an honour to help with their vehicle logistics via the Pacific Northwest and to elevate our local economy and workforce in Grays.”

Anticipated volumes for the new contract have not been made public, but Pasha said it had processed over 500,000 vehicles since establishing operations at the port in January 2009.

Data from the most recent Finished Vehicle Logistics annual North American port survey reveals that 48,681 vehicles were processed at the Washington State port during 2016. Within that, exports almost halved to 33,555 vehicles during the year, while imports nearly doubled to 15,126 finished vehicles.

The prior year’s survey showed a similar trend of falling exports from Grays Harbor, down 33% from more than 100,000 in 2014 – which was attributed to a drop in FCA exports to China and Asia.

Exports still outweigh imports at Grays Harbor, however, leaving excess rail capacity for vehicle imports into the country, according to Penny Eubanks, general manager at the port.

“Imports, especially landbridge, are attractive given the availability of rail equipment stranded at the facility from unit trains carrying on export business, and the ability to access two class one railroads from the terminal,” said Eubanks. “The facility is also well positioned to save days of steaming time as an alternative for ocean carriers currently calling Portland and Seattle/Tacoma.”

In 2016, FCA produced 459,000 vehicles in Mexico from plants near Mexico City (Toluca) and Monterrey (Saltillo), according to AMIA, the country’s automotive association – an 8.8% decline compared to 2015. Of that total, more than 443,000 vehicles were exported to the US and Canada.

Speaking at the recent Finished Vehicle Logistics Import Export summit in Baltimore, Alrick Duncan, intercontinental and port operations supervisor at General Motors (GM), said vandalism on trains carrying cars from Mexico was encouraging it to use short-sea options instead. He said the company had also recently begun using Grays Harbor as an import destination.

On the US west coast, Pasha operates car-handling terminals at the ports of San Diego and Grays Harbor, and more recently at San Francisco, after signing a 15-year lease agreement last year.

The port of Lázaro Cárdenas on Mexico’s east coast exported 108,477 vehicles in 2016, an increase of 2%. Other carmakers that use it include Nissan, GM, Mazda and Kia. Export destinations include the US, Canada and Brazil.