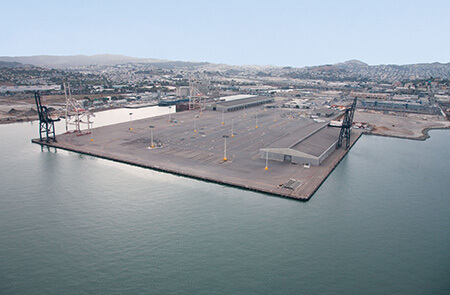 Pasha Automotive Services (PAS) processed a total of more than 448,600 vehicle units across its four port terminal facilities in the US through 2017 for around 17 customers. The company, which is part of the wider Pasha Group, has operations on the US west coast at the ports of Grays Harbor, San Diego and at Pier 80 in San Francisco, as well as the Tradepoint Atlantic terminal at the port of Baltimore in the south east of the country.

Pasha’s facility at San Diego handles the biggest volume by far (see table below) and in collaboration with the port authority has carried out some extensive renovation work at a former Oil Tank Farm property adjacent to the terminal and reclaimed the land for truck haulage operations to improve throughput for its customers.

The company also secured a contract last summer to process FCA vehicles imported into Grays Harbor, on the US west coast, from the port of Lázaro Cárdenas in Mexico.

That is not all, according to Mason, as the company has secured additional volumes from two more carmakers.

Can you detail some of the positive developments or drivers of finished vehicle business over the past year, other than the FCA contract at Gray’s Harbor announced last August?In 2017, PAS welcomed Tesla to our new San Francisco Pier 80 Terminal, beginning with spot business shipping Tesla product to China. This expanded in late 2017 to include Tesla exports to Europe. Tesla has been an excellent partner and we look forward to continuing to grow our relationship in 2018.

In January 2018, the launch of the Toyota Tacoma product from Toyota Motor Manufacturing Baja brought 160,000 additional units annually through National City Marine Terminal in San Diego for processing and truck/rail shipment throughout the USA.

[mpu_ad]Has Pasha invested in technology that might assist in tracking, communicating and optimising vehicle flows?Pasha has launched into a significant upgrade of its systems, communications and yard management capabilities. Beginning in late 2017 and continuing through 2018, Pasha has re-architected our EDI communications capability with all of our OEMs in order to lay the foundation for future implementation of a sophisticated yard management solution. The team is currently working through detailed process mapping to support smooth implementation in late 2018 and 2019.

What are three main three issues affecting vehicle flows and logistics at the ports at which PAS provides services? Do these issues differ by region?Vehicle dwell – long dwelling of unassigned vehicles contributes to terminal congestion and increased labour costs due to vehicle movement and consolidations; inbound bunching of vessels and inbound railcars – when the terminal has an uneven flow of units into the terminal, it increases “peaking” demand for storage acreage and labour, resulting in higher costs; and inaccurate vessel arrival schedules caused by vessel delays at preceding ports – when vessels are delayed in other ports due to congestion, then all of the subsequent ports on the vessel’s schedule are impacted. This also takes a smooth, well planned arrival schedule and creates a bunched, unanticipated arrival schedule, placing high demand on acreage, labour and inland transportation resources to move units out of the port following discharge. 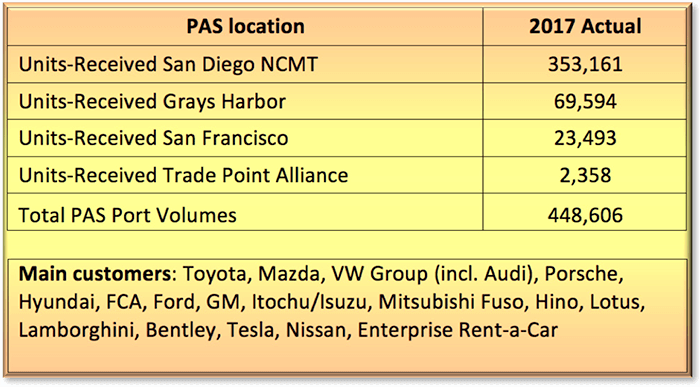 What have been some of the more negative or challenging issues for handling finished vehicle volumes through 2017 and into this year?Overall flattening of the market and very high dealer inventories in Q1 caused product to back up and dwell excessively at ports, which also caused a sharp inbound volume drop in February 2017, followed by a gradual climb back to normal volumes by year-end. This year is performing stronger.

What do you see as the likely impact on the automotive business at the port, should the US pursue a trade war with China?We are hopeful and confident that future opportunities for a positive trade relationship with China are strong, and will help stimulate additional marine cargo business, revenue and jobs.

What changes have you seen over the last year in relation to Mexico trade?Increased inbound volumes, both rail inbound and short-sea marine inbound. There was some shifting of volume from rail to short-sea due to high vandalism on Mexico rail, however this appears to have subsided somewhat in late 2017 and early 2018. There were major increases in inbound truck volumes from Mexico in late 2017 and YTD 2018.

Developments at ports in North America will be central to discussions at the forthcoming Finished Vehicle Logistics Import Export summit in Baltimore, which takes place on August 7-8