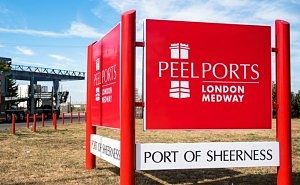 Peel Ports, one of the UK’s largest port operators, has received planning permission from Swale council to develop a 50-plus hectare derelict industrial site at Sheerness, about 80km east of London.

Peel’s existing port at Sheerness, along with the port of Chatham, form the core of its London Medway cluster. The company handles a range of cargo along the 43km stretch of the Rivers Medway and Swale, including forest products, steel and cars.

The company said it had already received strong interest from existing customers Gefco and Volkswagen regarding the £50m ($61m) development of the former Thamesteel site.

“Not only will this allow us to breathe new life into a site that has lain derelict for four years, it will also allow us to reconfirm our commitment to the future of the region – creating new jobs and investment opportunities,” said Paul Barker, port director at Peel Ports London Medway.

An additional 240 jobs are expected to be created, on top of the existing 1,640 people employed at the port.

The expansion forms part of the company’s 20-year plan to reclaim up to 125 hectares of land for expansion, mixed use and a new marina.

In June, a new grain loading facility was opened at Sheerness in partnership with commodities trader Glencore.

Peel Ports strategy director Hamish Scott recently predicted the UK’s vehicle handling ports would enjoy a boost from the weaker pound that has resulted from the UK’s decision back in June to leave the European Union.

In the automotive sector, the company already counts VW, Jaguar Land Rover, Gefco, the IM Group and Ford as customers.

The company operates a number of ports on both sides on the east coast and on the west coast of Britain, as well as in Dublin, in the Republic of Ireland.