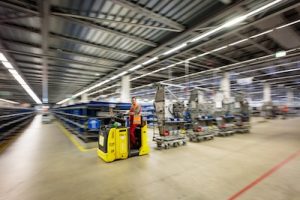 Porsche’s plant in Leipzig, Germany is taking over complete production of the new generation Panamera sports saloon. Full production is ramping up already, according to the carmaker, and will initially involve 4S, 4S Diesel and Turbo models going on sale in Europe from November 5th. Vehicles for other market regions and further model derivatives will follow.

Since the Panamera’s launch in 2009, Volkswagen’s plant in Hannover has made the bodies-in-white, which have subsequently been shipped to the Leipzig plant for pre- and final assembly. The Leipzig plant will now take over the entire process, said the manufacturer, including body shop and paint shop functions. The Leipzig plant will take on 600 additional staff and employ more than 4,000 people for the first time.

“We have a highly motivated workforce which has proved it can produce highly complex products in Porsche quality,” commented Siegfried Bülow, president and CEO of Porsche Leipzig.

The Leipzig plant already carries out full production of the Macan SUV. A spokesman for Porsche said production capacity at Leipzig was 650 cars per day, but pointed out that with this year’s transition to the new Panamera, overall production of the model would not be at the same level as last year.

Porsche has recently expanded the plant for the fourth time with a €500m ($557m) investment to support full production of the Panamera. The expansion included the new body shop with a production area of around 56,000 sq.m, completed in two years, and a new quality centre.

Leipzig’s lean logisticsThe carmaker has been using a lean logistics concept to support Panamera production at the Leipzig plant since 2009. As part of an original €150m investment there, it allows parts to be delivered at high frequency just an hour before they are needed on the production line, removing the requirement for the majority of its storage space.

Every day, 550 trucks deliver a total of 25,600 pallets to the Leipzig factory, 17,000 of which are for assembly with 8,600 for the body shop. Material is picked, sequenced or sorted for production in the body shop and assembly logistics supply centres. According to Porsche, about 270,000 individual parts are needed every day and the large variety and individualization of parts makes accurate delivery essential, something that is ensured by vehicle-specific picking.

"One focus of assembly supply is the just-in-sequence delivery of about 75 modules, such as cockpits,” said Porsche’s spokesman. “These are delivered directly from the suppliers to the factory without interim storage, straight to the assembly location, in exactly the correct order and at the right time."

While Porsche would not confirm its current supplier or logistics provider contracts, Schnellecke Logistics has been handling module assemblies for Porsche production in Leipzig for some time. These have involved a number of major tier suppliers such as Magna, Sumitomo and Ti-Automotive, according to Andreas Wagner, chief operating officer of the Schnellecke Group. To meet demand for the increased business, Schnellecke recently built a 13,500 sq.m logistics centre close to Porsche's plant.

A spokesperson for Schnellecke confirmed that the company was supplying module assemblies to the Porsche plant also for the new Panamera.

"The warm-up [for production] is well known by our management and team," said the spokesperson. "For Schnellecke, in practice there is no difference in suppling parts to the new Panamera compared to its predecessor. We at Schnellecke are very proud that our processes and very good support in supply chain for Porsche in Leipzig are a basis for furthermore cooperation in this new project."