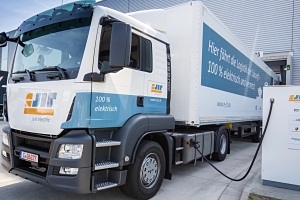 Porsche says it has started testing an electric truck for deliveries from the logistics centre at its Liepzig plant in Germany to the nearby assembly supply centre.

The trial uses a 40-ton tractor unit with an electrical drive. It has a top speed of 85 km/h and a range of 70km.

Using a 150kW fast charger, the battery will be charged, during the planned waiting times while it is being loaded at the supply centre, meaning it can be used in an entire three-shift cycle.

The second stage of the three-year project will see a ‘highly automated’ truck operate at Leipzig from 2018 onwards.

Alongside the project at Porsche Leipzig, Volkswagen Sachsen is testing a second electric truck at its Zwickau plant.