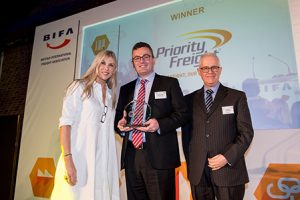 Time-critical logistics provider Priority Freight has been recognised with a Specialist Services Award from the British International Freight Association (BIFA) after a complex crisis-management project that involved moving a component production operation from the UK to the US to prevent supplies to numerous carmakers from being suspended.

The emergency project involved relocating a production operation after a manufacturing crisis at a Coventry, UK-based automotive component supplier, and entailed chartering a specialist aircraft, securing flight permits and arranging subsequent road transport to move 150 tonnes of stamping press machinery from Coventry to Michigan via Toronto over a weekend during which both the UK and North America were hit with severe winter weather.

Following establishment of the alternative production operation in the US, Priority Freight went on to manage door-to-door delivery of components from there back to the UK, as well as coordinating further component supplies from China, managing 1,500 tonnes of goods from the US and 500 tonnes from China over a three-month period.

The operation served four different carmakers and six production plants across four countries, helping to avoid production losses that would have run into hundreds of millions of pounds a week.

Commenting on the award, Williams said: “We are thrilled to [be] recognised by our peers for our level of expertise and service excellence. This award further secures our company’s position as a leading provider within the supply chain and supports our aim to become the leading provider of emergency and time-critical logistics solutions in Europe."