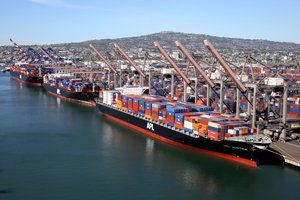 EQT Partners, the Swedish private equity group, has acquired a 90% interest in the Global Gateway South (GGS) terminal at the Port of Los Angeles for $817m.

The investment is being made by the EQT Infrastructure III fund which completed a €4 billion ($4.5 billion) fundraising in February.

The seller, CMA CGM, the world’s third largest shipping line and the largest on the Asia-US trade route, will retain 10% ownership and has agreed to sign a long-term utilisation agreement.

GGS is the third largest terminal in the Ports of Los Angeles and Long Beach in terms of capacity, and operates under a long-term concession that runs through to 2043.

According to the Port of LA, the $270m container terminal opened in May 1997 and is the largest complex of its kind in North America. One of its primary features is its on-dock railyard.

The terminal provides intermodal container handling services to shipping lines including stevedoring, intermodal/truck services, storage and maintenance, and is on track to handle over a million containers in 2017, according to EQT.

Its berth depth will also allow it to accommodate the latest and future generations of large container ships.

CMA CGM said the sale was fully in line with its strategy to focus on its shipping business while securing its operations through shared ownership of key terminals.

The transaction is expected to close in the fourth quarter of this year.