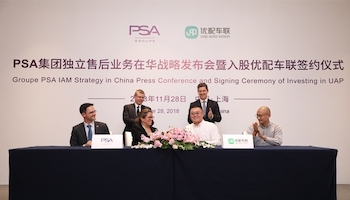 Carmaker Groupe PSA has purchased a stake in Chinese spare parts supplier UAP, based in Shandong province, as part of the French group’s expansion in China strategy.

The latest acquisition is a first step and could lead to a greater interest in UAP, with several steps defined to increase PSA’s participation, a group spokeswoman told Automotive Logistics, without revealing the percentages involved.

As part of its global corporate Push to Pass growth strategy, PSA is pressing ahead with a multi-brand aftermarket offering, notably through its Eurorepar range for maintenance and wear-and-tear replacement parts.

“Our ambition is to become a leader in spare parts distribution and multi-brand repair in China, and this could lead us to new acquisitions or partnerships,” said the spokeswoman.

PSA is also expanding its multi-brand repair business, Euro Repair Car Service, with more than 350 garages already signed up in China. Acquiring a stake in UAP will boost that expansion, says the group

Christophe Musy, senior vice-president of PSA Aftermarket, added: “China will soon be the world’s biggest aftersales market, and we have set ourselves very high ambitions there, which is why we’re already securing strong market positions.”