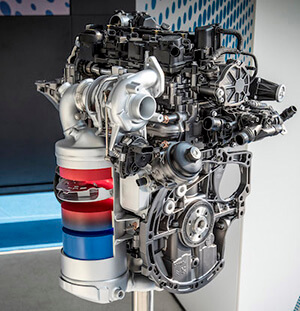 Following its takeover by Groupe PSA last year, Opel/Vauxhall’s engineering centre in Rüsselsheim, Germany, will take on global responsibility for development of the next generation of high-efficiency petrol engines for all Groupe PSA brands.

The engines will be used in the Peugeot, Citroën, DS Automobiles, Vauxhall and Opel marques in China, Europe and North America, and will meet those markets’ future emission standards. The engines will also be optimised for operation in combination with electric motors and used in the drivetrain of hybrid systems, the company said.

A company spokesman told Automotive Logistics it was too early to disclose details about the new engines as market introduction would only begin in 2022, but that engineers were developing them on the basis of PSA’s current all-aluminium four-cylinder PureTech units. They will be highly efficient and deliver low fuel consumption and CO2 emissions, he suggested.

The engineering centre, near Frankfurt, has also been designated as the lead in development of light commercial vehicles for the PSA group.

“On the R&D side, we are combining two teams with potentially the best education and engineering background in the world,” said the spokesperson. “This is a new concept for Groupe PSA that has been set up to benefit from more experienced and recognised international skills and to strengthen its engineering teams in the face of technological challenges.

“Groupe PSA’s other development centres around the globe will continue to develop highly efficient and modern combustion engines,” he added.

When PSA took over Opel/Vauxhall from GM last year, its CEO Carlos Tavares said the company would support common platforms, common powertrains and co-development in engineering.

“[We will] bring everything we have learned in the manufacturing and supply chain system that we think can also be implemented in Opel/Vauxhall,” he said.

The Russelsheim announcement comes shortly after PSA said it would increase output of its SUV range across Europe “using all its available resources and assets” to meet market demand. The drive to increase SUV production was also trumpeted as part of a wider PSA commitment to Opel after the group agreed measures to improve competitiveness with the IG Metall union and works council.