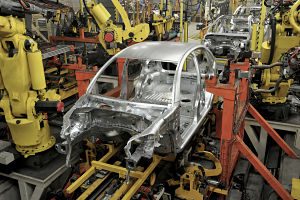 A new report by the Boston Consulting Group has estimated a border adjustment tax, encapsulated within the broader corporate tax reform being pursued by US politicians, would result in US carmakers and suppliers paying $34 billion in annual import taxes while recouping only just over a third of that on exports.

Under the proposed tax system, imported inventory and goods would no longer be tax-deductible as a cost, effectively taxing them at 15% to 20%, while exports from the US would be excluded from taxable income.

The proposal has worried major companies in the US who rely on imports, including large retailers and some major carmakers.

Toyota, for example, urged its US dealers earlier this year to challenge lawmakers in the country over the border adjustment tax, stating that it would seriously hurt car buyers.

The carmaker sent an urgent message to its 1,500-strong dealer network urging them to contact politicians and explain that such a tax would be detrimental for customers, according to Reuters.

Boston Consulting’s report estimates that the industry’s total import tax (using 15% corporate tax) of $34 billion a year, net of the $12 billion recovered on imports, works out to an additional $1,000 per-vehicle manufacturing cost at the top 12 OEMs selling cars in the US. A 20% border adjustment tax would increase this figure to $1,800 per vehicle.

This average does vary across individual OEMs. Among those assessed by Boston Consulting, the automaker with the least advantageous sales mix relative to these criteria would face an average $3,000 per vehicle production cost at the 15% rate. The OEM in the best position, meanwhile, would actually save an average of $500 per vehicle, chiefly because of tax-advantaged exports of its more expensive vehicles manufactured in the US.

To minimise the impact of the resulting selling price increase, certain vehicle features, including advanced safety and driver-assist technology, like rearview cameras and automatic braking and parking functions, may be sacrificed, according to the study.

“This, in turn, would diminish motor vehicle industry employment in the US,” said a statement from the Motor & Equipment Manufacturers Association (MEMA), which commissioned the report.

Double trouble? Outside of the financial implications, the tax, coupled with the Trump administration’s intentions to overhaul the North American Free Trade Agreement (Nafta) or even withdraw from it, could have a severe impact on complex supply chains in the region.

“Vitality in the motor vehicle sector hinges on a globally integrated supply chain,” said Xavier Mosquet, a Detroit-based senior partner at Boston Consulting and the lead author of the study.

“By introducing new tariffs, a border tax and a retreat from Nafta would greatly impede the industry’s relatively smooth and cost-effective flow of goods across borders in North America and around the world.”

According to the study, the threat by the US to walk away from Nafta “carries at least the same potential implications for the motor vehicle industry as calls for a border tax”.

The study found that US tariffs in the range of 20-35% would add $16-27 billion to automotive costs in the US market. At the top 12 passenger vehicle manufacturers in the US, a 20% tariff on Mexican imports would translate into a $650 average increase in per-vehicle production costs.

Boston Consulting estimates that about half of all imported parts US OEMs procure for vehicle production come from low-cost countries and nearly 50% of these components are from Mexico.

The risk of a complete withdrawal from Nafta has decreased of late, after last week’s summary of the US’s objectives in upcoming negotiations highlighted a clear desire to retain tariff-free trade arrangements with Canada and Mexico.

The MEMA statement on the report says that if the support for a border tax and withdrawing from Nafta is intended to create conditions that encourage the expansion of US automotive factories and reshoring from other countries, macro trends in the global auto industry work against that outcome.

It says the primary obstacle to any reshoring of supply chain was an estimation that the US automotive sector had peaked at about 17.5m units in sales last year and was unlikely to surpass this level until 2025, leaving no incentive for manufacturers to invest in growth.

“Consequently, it would not make sense for OEMs to invest in new plants or enlarge operations in this environment. US motor vehicle suppliers face a similar capacity situation in North America,” said the MEMA statement.

In addition, the study looked at specific examples where reshoring would not make sense, even with the tax, due to much higher labour costs in the US.

Calculating production cost changes for two automobile interior components, BCG found that a part costing $15.30 per unit to assemble in Mexico would cost $2 more to make in the US, including the savings from avoiding border adjustment tax.

Production costs for another $100 part would drop by about $11 per unit if manufacturing were shifted to the US from Mexico, but at that rate, it would take nine years to pay back a $50m factory investment in the US – “well above the three-year return on investment period that manufacturers typically aim for,” according to the study.