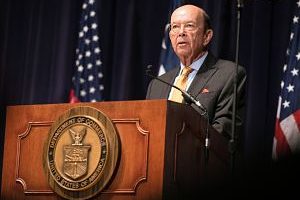 Reports this week have suggested President Trump’s administration has become more open to negotiating a trade deal with Europe, despite previous criticism of the bloc by the US president, who has already withdrawn from one multilateral trade agreement and called for the overhaul of another since taking power in January.

The US is by far the biggest export market for European produced passenger cars with €37.7 billion ($41 billion) worth of vehicles shipped there in 2016, almost double second-placed China at €19.76 billion and 30% of the region’s entire export value. The US exported €7.2 billion worth of passenger cars to Europe last year, meanwhile.

Citing a White House source, The Times newspaper in the UK reported that Trump and his administration had had a “realisation”, following a recent meeting with German chancellor Angela Merkel, that creating a trade deal with the bloc would be easier than first thought.

The article also suggested that the UK, which is busy removing itself from the EU following its recent referendum on the matter, was now behind Europe in negotiating any deal with the US, despite positive signs from both sides following Trump’s election that a quick-fire deal may be secured after ‘Brexit’.

In an interview with the Financial Times (FT) this week, US commerce secretary Wilbur Ross (pictured) described it as “only logical” that the US focus on Europe, given that the $147 billion US trade deficit with the region was second only to the $347 billion deficit with China.

Ross met Cecilia Malmström, the EU’s trade commissioner, in Washington on Monday. Following that meeting, she addressed the subject of the Transatlantic Trade and Investment Partnership (TTIP) in a speech after receiving the Woman of the Year Award from the Association of Women in International Trade.

“For my part, there is still a case for an ambitious trade agreement between the EU and the US, the two largest economies in the world,” she said. “Such an agreement has the potential to create jobs on both sides of the Atlantic.

“We both need a bit more time to see where we are,” she continued. “From the EU's side, we would also need to clarify that both sides share an ambition to find solutions to difficult issues. And even apart from TTIP, it's very important that we now create a constructive and ambitious transatlantic trade agenda going forward.”

The FT report suggested US officials had indicated that negotiations were unlikely to progress significantly until after the German election later this year.

Meanwhile, Wolfgang Schäuble, Germany’s minister of finance, is said to have told reporters after last Friday’s G20 minister of finance meeting that he was confident a “non-confrontational solution” on trade could be found with the US at July’s G20 summit. He had met the US treasury secretary earlier in the day.

Last year, following the signing of Europe’s trade agreement with Canada (Ceta), Germany’s automotive association, the VDA, spoke of the importance of securing agreement on the proposed TTIP between the US and Europe.

“Now, it is important to complete the negotiations on TTIP also. Ceta can only unfold its full potential alongside TTIP,” said VDA head, Matthias Wissmann, at the time.

Following the US election, Wissmann called on President Trump not to abandon the negotations. "More protectionism or additional trade barriers would be harmful to the United States just as much as to its trading partners,” he said. “So TTIP is of special importance. And we hope that the TTIP negotiations will be boosted under Donald Trump. Together, the US and Europe can set high standards that will then serve as models around the globe."

According to the European Automobile Manufacturers Association (ACEA) EU-US auto-related trade currently accounts for some 10% of total trade between the two regions.

Non-tariff related benefits that could also come about under a successful TTIP negotiation include the ability to sell vehicles with little modification or reassessment for each respective market, as well as regulatory convergence of both safety and environment regulations.

Despite Trump’s criticism of the likes of BMW for building plants in neighbouring Mexico, Germany's carmakers have a strong existing US production base. German manufacturers have over the last seven years quadrupled their light vehicle production in the US to 850,000 units. More than half of all vehicles built there by the German OEMs are exported.

As promised in his election campaign, US president Donald Trump issued his first executive order in January by officially withdrawing the US from the Trans Pacific Partnership (TPP) trade deal.

At the time, the US president said his administration’s intention was to deal directly with individual countries on a one-on-one basis in negotiating future trade deals.