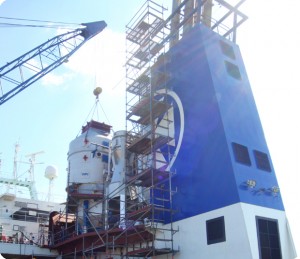 With ten months to go before new environmental restrictions come into effect in the Baltic and North seas, and the English Channel, many ro-ro carriers are still deliberating what method they are going to adopt to operate in the 0.1% sulphur emission control areas (SECAs).

Most are choosing between three compliance options: expensive low emission fuel, alternative fuels including liquefied natural gas (LNG) or methanol, or onboard scrubbers. While many disagree on the best approach, all agree that it is going to affect them in a big way.

The International Maritime Organisation’s restriction on sulphur have been known since 2008. According to Mike Garrett, managing director of MDS Transmodal, carriers have been living in denial in confronting the issue, spending too much time hoping the legislation would be changed or delayed.

“When SECA was proposed, when it became clear in 2008 that the rules would kick in in 2015, there was a great confusion as to how to react,” said Garratt, speaking at last week’s Ro-Ro Shipping Conference in Gothenburg, Sweden. “There was a denial that the viable technology would be available and a hope that the authorities would back down.

“This doesn’t reflect terribly well on this industry as to how to react to what was a very considerable challenge to its status quo.”

But despite this equivocating, shipping providers at the conference did raise legitimate questions over whether there will be enough marine gas oil (MGO) to go round – analysts have estimated that an additional 50m tonnes will be needed – and who is going to pay for it at the end of the day. Recovering the cost of retrofitting scrubbers or LNG tanks to existing vessels is another concern.

“We don’t know what we are going to do,” admitted David Slater, deputy general manager of operations and port cost control at Mitsui OSK Lines. “It is going to hit us in the pocket in 2015. Do we put up our freight rates? That is what we will have to do, but can it be done?”

That is not something the carmakers seem willing to take on board. “Five dollars is not a lot to add [to the cost of a car] but if you add a couple of million to a transport budget that we are trying to reduce, that is something else,” said Magnus Ödling, head of network strategy and business applications at Volvo Car.

Slater’s concern, shared by other car carriers at the meeting in Gothenburg, was about how the company was going to pay for the increased cost of operating on the short sea ends of its deep sea routes. He explained that the traditional 3-4 port calls in Northern Europe the company makes amounts to an average of 3.1 days in the SECA. Having to use the more expensive 0.1% sulphur content fuel while in the zone would mean an additional $35,000. This figure would increase with calls made further into the Baltic.

That figure is unlikely to be a problem for the deep-sea operators, which account for 90% of car capacity on the ocean, and who are only in the maritime zones (which also include the US and Canadian coastlines) for a minority period of their overall journey.

For short-sea carriers operating exclusively in Europe, however, it’s a bigger problem, since some carriers’ routes are largely based in the control areas. According to Simon White, senior vice-president of trade and operations at UECC, a short-sea provider with a large amount of automotive business, five of the company’s 23 vessels spend 25% of their time in SECA, seven spend about 50-60% of their time, and the remaining six 100% of their time. “Our exposure is quite a lot higher,” he said.

Viking Line, a Finnish carrier operating exclusively in the Baltic, plies the SECA for 100% of its services. Harri Tamminen, vice-president, freight and port service at the company, said LNG already powers one of its seven vessels, and the company is considering switching to this fuel as it replaces the other six, ageing vessels in its fleet. Currently, however, not every European port has LNG available.

Another option is the use of onboard scrubbers to take out the sulphur, something DFDS has committed to using on certain trade lanes but an option that UECC is approaching with caution.

“It’s feasible for certain trades but it’s difficult to say it’s the optimal solution,” said UECC’s White. “For us, it will be on the newer vessels and on those where it is technically feasible and makes sense, and on those where we are trading them in a way that we can get a return on investment that we need.”

For other shipping lines, including MOL, it does not make financial sense to retrofit scrubbers to existing vessels. “The use of scrubbers has been looked at but is not being considered,” said Slater, citing estimated costs of up to $2m to fit each vessel. “It is only economical on a new build.”

According to Poul Woodall, director, environment and sustainability at DFDS, the cost is actually much higher at between €5.2m and €9.3m per vessel (including the cost accrued in lost service during the fitment). Fitting scrubbers adds around 70 tonnes of hardware (plus tank content), risking instability on smaller vessels as well as losing capacity on the car deck. Nevertheless, by 2015 Woodall estimates the company will have fitted scrubbers to 18 of its vessels at a total cost of around €100m ($137m).

Wallenius Wilhelmsen Logistics is currently trialling the technology in a hybrid version on its PCTC vessel Tarango, but on the whole, deep-sea car carrier operators are not taking as much account of the SECA rules when investing in new ships (an approach similar to the larger container vessel providers).

Even DFDS sees the technology more as a bridge to cover the time needed to build a full LNG-powered fleet. However, there has been a greater uptake of scrubbers over the past eight months, according to Per Funch Nielsen, general manager, physical supply at OW Bunker, a global supplier and trader of marine fuel oil. He noted that it requires investment from a sector with little capital liquidity.

According to Nielsen, customers operating in emission control areas will require on average 50% more credit from their fuel suppliers. “To ensure compliance and customer access the conversation with fuel suppliers should be happening now,” he pointed out.

Mike Garratt said that the industry would eventually have to invest in newer and larger ships, much as the deep-sea container industry has done. This could, however, have negative impacts on the European short-sea network. Already today 45% of fleet capacity carries 72% of intra-European ro-ro tonnes. Meanwhile, the number of vessels has fallen by 8.1% between 2006 and 2014. According to Garratt, SECA will reinforce this pattern and concentrate fewer ships on short crossings unless the industry structure changes.

In the meantime some are faced with strategies that could run counter to the environmental principles underpinning the sulphur restrictions, including burning more fuel in parts of Europe outside the control areas, and slow steaming within the SECA. “We may go full blast outside of the SECA zone and then coast through it as much as we can,” said UECC’s White. “The fact that from an overall consumption and environmental perspective it is about the worst thing you can do.

“Is it the right thing for the environment? Not really. But is it the lowest cost alternative? Yes it is.”