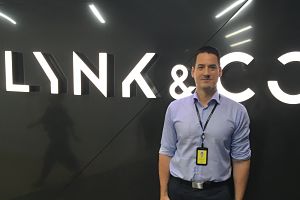 Former director of outbound operations at Volvo Cars, Rodrigo de Paula (pictured), has said he is looking forward to implementing a number of interesting projects and new ideas in his new role as director of logistics operations at Lynk & Co.

The Brazilian national joined the carmaker in June on the back of a wider reorganisation and integration of Volvo’s own global logistics functions. Volvo Cars and Lynk & Co are both part of the Chinese company, Zhejiang Geely Holding Group.

His responsibilities at Lynk & Co encompass logistics for finished vehicles and spare parts for distribution from China to Europe and the US, with a focus on a new distribution network and a sales model that will bring the OEM closer to its customers.

“We have a lot of interesting projects and ideas within Lynk & Co that will be new to the way we manage vehicle logistics, from the supply chain from China to global sales, and also our model to bring the OEM closer to the customers,” de Paula, who is based in Gothenburg, told Automotive Logistics.

After graduating in mechanical engineering in Brazil, de Paula moved to Sweden to study logistics and transport management. He then started a 16-year career at Swedish-based Volvo Cars. In his time there, he held a number of roles including three years in China in material planning and logistics, and, most recently, four years as director of outbound logistics operations.

The Lynk & Co brand was officially launched in October, not only to offer a fully connected digital vehicle and to try and penetrate western markets from China, but also in an attempt to change the way cars are bought, owned, serviced and used – one that could have serious implications for logistics and supply chains.

The brand aims to share common production and distribution with Volvo Cars. The initial 01 model, along with other Lynk launches, will be based on Compact Modular Architecture (CMA) developed in Sweden by the joint Geely and Volvo China Euro Vehicle Technology (CEVT) centre in Gothenburg.

A recent announcement revealed that Volvo would hold 30% directly in Lynk & Co as part of a new agreement that would see the entities share existing and future technology.