Daimler’s outbound logistics providers were told that they needed to improve their performance and invest in new transport equipment to support the carmaker’s ‘best or nothing’ credo at this year’s European Carrier Day, writes Marcus Williams.

Das Beste oder nichts. The best or nothing. Gottlieb Daimler’s motto echoed clearly at the company’s European Carrier Day held this year at the Mercedes-Benz truck plant in Wörth, Germany. Delegates could see for themselves the longevity of that tenet translated into the latest Actros truck, which has been coming off the line there since September and which won Truck of the Year 2012 at the recently held international specialist trade fair, Trailer 2011. It formed the backdrop for presentations and awards filled with reassuring economic forecasts, brand promises and new tenders for 2012.

In the interests of continued sales, the need to maintain international high standards of delivery and preserve the quality of passenger and commercial vehicles leaving Daimler’s global production bases has rarely been tested to the extent it has recently. The need to maintain the carmaker’s heritage of quality and not have it compromised by increased damage incidents and late arrivals explains the emphasis it has put on the investment needed in better transport equipment on the part of its carriers. The question is whether providers will share Daimler’s optimism for 2012 sales and production. 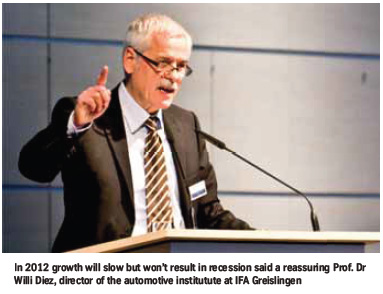 Backlogs and bottlenecks
Daimler has its own key performance indicator (KPI) monitoring to look after its high standards but last year it recorded a drop below 70%, the baseline for its performance related payment (PRP) system, designed as an incentive to maintain Daimler’s high expectations. This year it dropped further as a consequence of Daimler’s high transport volumes and the extent to which the European supplier base had seen its car carrier fleet shrunk. “Across the board performance has to improve again to meet our high expectations,” said a critical Jen Burmester, manager for quality management. Pick up time was an area of particular concern, according to Dr Holger Scherr, head of worldwide transport logistics, who said that Daimler was challenged in 2011 with backlogs not seen before. “We have end-to-end transport chains with deadlines and these are critical,” he stressed. “

The pick up time is your core competence and you should never lose sight of that. If it doesn’t work then people will start looking for an alternative, so let’s not forget that.” Looking for reasons for this second year of poor results Burmester recognised that the company’s volumes had rebounded enormously after the downturn, especially in export markets. He noted that coping with these rising volumes required higher transport capacity but said there had been a lack of investment in regular and replacement equipment. “You can see that [lack] in many fleets, where the technical standard has really gone down,” he said. Burmester admitted that in the last two quarters there was a slight upward trend in passenger car delivery performance and that, on the whole, the commercial vehicle side of the business had remained more stable, at around 60% with an upturn in the third quarter of 2011. But he said things needed to improve. Daimler has agreed to meet the carriers halfway and it was announced that the company will modify its KPI on distribution time, extending the timeframe for pickups from two to six hours.

Burmester also said that the company may not have been transparent enough in its PRP model of evaluation in the passenger car segment, which is rated per tender, something he admitted was a complicated approach. So, from next year, the company will use the same approach for passenger cars that it does for commercial vehicles, measuring KPIs and the modification of rates every six months.

A need for optimism
The real emphasis at this year’s event, and something that was designed to engender the need for greater investment amongst the LSPs, was on positive economic forecasts, delivered by leading experts both within the Daimler organisation and from representatives from the IFA (Institut für Automobilwirtschaft) and the German Association of the Automotive Industry (VDA) who backed up Daimler’s confident view that self-defeating forecasts about the economy, largely media driven, had little basis in the results they were seeing.

While acknowledging significant economic uncertainty, IFA’s Prof. Dr Willi Diez, director of the automotive institute at Geislingen, saw global growth for the industry at 4% in 2012, ruling out another recession. “The markets are volatile and there are different developments but it cannot be compared to 2008 because everyone has learned from the Lehman collapse,” said Diez. “I adhere to my forecast: next year growth will slow but we won’t have another recession.” For Europe, Diez stressed that, while vehicle sales growth would be slow in 2012 (at 1.1% in total and 0.9% in Germany), it was not tantamount to a slump. Diez told the carrier representatives assembled that this distinction was important for their businesses and investment behaviour. “If the market continues to grow, actually you should continue to invest to live up to those circumstances.” The growth regions out in front, of course, are in Asia, with 6.2% growth forecast for 2012, led by China, and in Latin America, which is expected to see 4.8% growth. This is important for European production because of the highly integrated character of the industry which now means that “growth there meant growth here”, said Diez. Daimler’s strong showing in the BRIC countries would have benefits for European production.

What Diez saw as a major stumbling block were the doomladen prophecies of market pessimists, which he said tended to get more attention in the media and distorted the real economic situation remains stable. Passenger car orders for German carmakers from abroad between January and November 2011 were up 12%, with actual exports for the year estimated at 4.55m units (of a total production level of 5.9m), up 7%. For 2012 passenger car exports will see growth slow and are forecast to be marginally above that at 4.57m units, with most gains coming from the premium market. Daimler’s recovery was described as “incredible” by Egon Christ, senior manager of Worldwide Transportation/Vehicle Distribution, and he appealed to carriers to join the carmaker in looking forward with confidence. Acknowledging that there were problems in financing and investment for carriers, Christ said he hoped the economic forecasts at the event would engender more appetite for investment because Daimler was suffering from a lack of capacity. Christ called on carriers to develop a more multimodal approach to deal with its expected volume increases in 2012 and avoid the bottlenecks it is already suffering.

Christ said that Daimler had experienced its own lessons during the downturn, during which the company asked carriers for contributions that Christ said represented the best compromise possible, given that Daimler had significantly higher, market-driven freight-saving opportunities. However, it found there was no real support for the strategy from them following its online carrier survey. “Your confidence was shaken and we learned our lesson. What we did at the time was defendable. But all the talk about a crisis is a thing of the past. New business has been tendered and we have normal market price levels reflected in the contracts,” he said.

The company is also bringing in reference costing for all finished vehicle traffic and an electronic tender platform (ETP). Reference cost calculations are now an inherent part of Daimler’s business and are informed by consultation with the carriers–referred to as a “bottom up” addition to the traditional “top down” tender process. Rather than compare prices the company will now source reference information provided by the platform and apply its own calculations to better control procurement. “The ETP will send you an email about where to go for tender information,” said Christ. “When the deadline is reached we can see the numerical results, which speeds up the process.” He also said that Daimler had modified its fuel adjustment clause back in March 2011. “Fuel is the biggest cost factor in your assessments and your EBIT. In 2011 diesel was characterised by volatility. It was not a reliable variable. So we modified the adjustment clause,” said Christ. Previously Daimler made price modifications only in the case of cost variation above 5%. Now it is implementing full fuel fluctuation risk coverage, “a major contribution by us for your sustainability”, according to Christ.

No need for pessimism
Looking ahead there was no reason for pessimism, according to Christ. He said that growth may be distributed unevenly 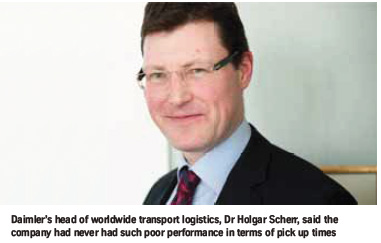 over next six years, but stressed that without investments in capacity Daimler would be forced to implement new outbound concepts. “In 2011 we had to resort to daily chartering rates and some of the smaller companies generated better turnover,” said Christ. He hoped that this was a thing of the past and the company could handle things in the normal way going forward. “Resorting to subcontractors means that quality and expertise decline,” he said. Such contractors were used to pickup volumes that had been waiting for transport for more than 48 hours, something that “makes us cross” said Christ. “Invest and go about your business professionally and we can all benefit,” he said.

There was no doubt left in the minds of those companies attending the event where some of that investment should go. Christ said there were too many third-party brands transporting its vehicles around and he highlighted the four rules Daimler applies when awarding contracts for its outbound logistics: a good logistics solution, logistics performance and price were three. Truck purchasing was the fourth. “Historic and future truck purchasing from Daimler influences sourcing decisions,” he said. “Those companies that don’t adhere to this will lose contracts in the future.” Some providers on the sidelines of the event complained that that this requirement to use Daimler trucks is a dilemma as they try to fill empty backhauls with existing fleets and maintain contracts with other commercial vehicle makers across Europe, meaning they cannot always use the same brand truck as those they are carrying. It is a familiar debate and a requirement that has been made from many commercial vehicle makers, but one that may ultimately require some leniency on their part in the name of efficiency–whether or not that will be the case remains to be seen.