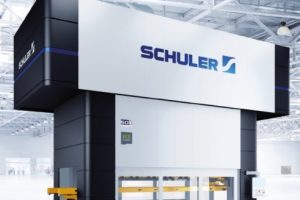 Industrial press manufacturer Schuler has worked with logistics provider Schenker Deutschland to secure the delivery of a 106 ton hydraulic press from its facility in Erfurt to the Institute for Advanced Composites Manufacturing Innovation (IACMI) research facility in Detroit, Michigan.

The press, which can exert a force of 4,000 US tons, is being used in the forming of carbon fibre-reinforced plastics (CFRPs) for lightweight component parts used in the automotive industry.

Based in Knoxville, Tennessee, the institute focuses on the development of technology for vehicle parts, wind turbine blades and compressed gas storage.

IACMI is currently expanding its research and development vehicle scale-up facility in Detroit as it looks for 25% lower costs and 80% recyclability of CFRPs.

“The efficient and economic production of fibre-reinforced plastics is a key opportunity here, and industry has identified a long term challenge – open access to composite manufacturing equipment where technology can be developed and demonstrated on full-scale prototypes,” said Ray Boeman, associate director of vehicle technology and programme manager at the Detroit facility. “With Schuler, we are bringing a key composite manufacturing capability online at the only facility of its kind in the US.”

Schenker Deutschland was in charge of the transport of the press, which is 4.7 metres wide. The machine was first brought to the city of Aken, from which it was shipped by barge on the Elbe river to the port of Bremerhaven. From there it was loaded on a ro-ro vessel to Baltimore.

In the US, daily status reports were provided about the position of the trucks, and there was also direct contact and close coordination with IACMI, said a spokesperson for Schuler.

“Because of the so-called Frost Law Restriction on the roads in Michigan, the transport of loads from 60 tons on is allowed only under certain weather conditions. However, the weather was favorable to all parties and the press could be delivered to IACMI to everyone's satisfaction,” he said.

Earlier this month, Schuler received an order from an as yet unnamed US automotive supplier for 15 press machines for delivery to the US and Mexico. It is the fourth order from the supplier in the last two years and includes transfer, ProgDie and stamping presses.