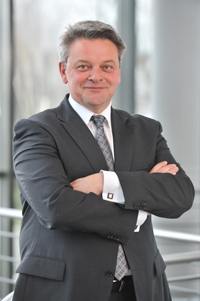 The Schnellecke Group is expanding services in Spain, including an extended contract with Audi in Barcelona, and a new assembly project in Pamplona. It has also ramped up automotive activity outside Europe, including in North America and in India, where it has added further complete-knockdown kit (CKD) handling services.

Schnellecke’s transport division has been awarded the contract for all direct transports between the logistics provider’s operations and for Audi, models for which are built at a Seat plant near Barcelona. Schnellecke is now responsible for the entire logistics process from delivery of material to packing, as well as outgoing finished components.

Despite the declines in the Spanish market, Schnellecke told Automotive Logistics that it is investing and expanding in the country. The company is currently adding new production lines at its body-module plant in Pamplona, in the north of Spain, according to Andreas Wagner, chief operating officer of Schnellecke Group (pictured). “We are actually investing and implementing two new production lines at our plant in Pamplona in the north of Spain, where we will soon start the manufacturing and deliveries of body modules to the Spanish plants of Mercedes and Ford, which are both new customers for us in Spain.”

Wagner admitted that the company has faced challenges posed by Europe’s economic situation, but cited a double-digit growth in 2012 and 2013, driven in part by Schnellecke’s recent expansion outside Europe and its core German market. While Schnellecke, based in Wolfsburg, Germany, which is also the headquarter for the Volkswagen Group, has a large amount of logistics and sub-assembly business with Volkswagen, Wagner said that the company has focused more on emerging markets, while also gaining more business with non-German OEMs such as General Motors, Chrysler, Ford and Nissan.

“We strongly focus our business development activities on the development of engagement in Brazil, Russia and China. We are also able to grow our business and customer base in India and South Africa,” he said.

Schnellecke has just added India as a receiving country for its CKD business. Its base in the country will provide the shipping of ready-painted car bodies with both ‘completely knocked down’ and ‘medium knocked down’ supplies catered for. The company recently had success in the same field by launching the service in China last year.

Schnellecke’s North American base looks similarly set to prosper: its Mexico plants currently employ more than 8,000 employees , where the company provides in-house logistics, warehousing, line feeding and sequence deliveries. According to Wagner, Schnellecke’s serves mature tier one and two supplies for its business with Chrysler-Fiat, Ford, GM and Volkswagen.

Along with its CKD and logistics services, Schnellecke also has a production division, KWD Automotive, which manufactures welded body modules, exhaust systems, chassis and interior components.