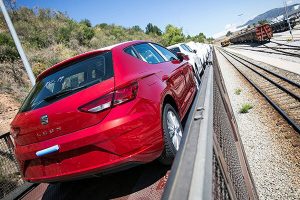 Spanish carmaker Seat has signed a new, three-year contract with Autometro to transport vehicles by rail from its Martorell plant to the port of Barcelona for export.

Operating since 2008, the service run by Catalonia’s regional railway FGC transports an average of 105,000 vehicles a year.

Under the renewed contract, several technical studies will be carried out to enable complementary rail traffic and adjust the service to Martorell’s needs, said Seat. At present, the car-carrying trains run three times a day from Monday to Friday and are integrated into the Baix Llobregat Metro rail service on the Llobregat-Anoia line.

Stressing the arrangement’s environmental credentials, Seat said it effectively replaced around 25,000 truck journeys between the assembly plant and port each year.

It is based on a 411 metre train with double-deck wagons, which can carry 170 vehicles at a time. During October, the service transported its millionth vehicle so far.

More than four-fifths of the cars made at Martorell are sold outside Spain.

Seat’s vice-president for production and logistics, Christian Vollmer, said: “The renewal of the agreement is clear proof of Seat’s commitment to rail transport... Seat will remain committed to logistics to make the distribution of vehicles more flexible, efficient and sustainable.”

The company also uses another FGC-managed rail service, Cargometro, to transport parts from the Zona Franca plant to Martorell.

The carmaker’s environmental efforts are not restricted to rail, however. Earlier this year, it announced it was testing the use of a 31.75-metre long truck with two trailers with transport provider Grupo Sesé.