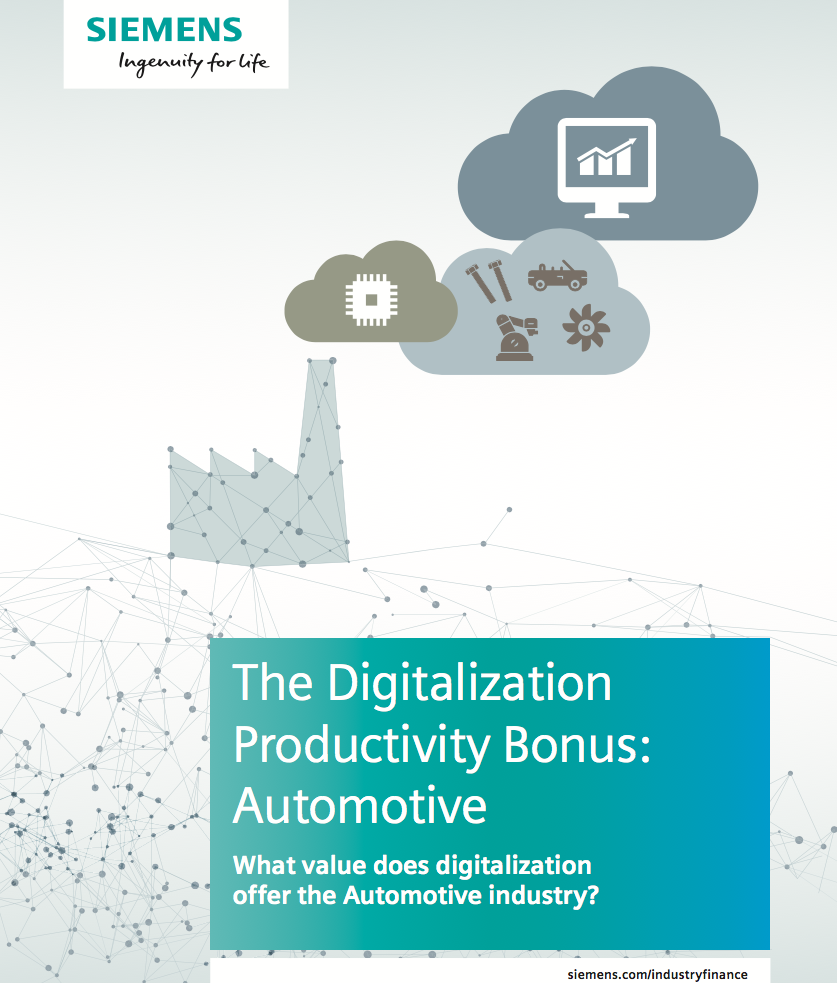 The automotive sector needs to invest carefully to reap the benefits of a potentially more efficient manufacturing and distribution model as the fourth industrial revolution – also referred to as industry 4.0 – takes hold, Siemens Financial Services (SFS) has warned.

Advising the sector to get ready for “extended disruption” in terms of the visibility and control in digitalised supply chains, SFS said investment in industry 4.0 technology and systems would rise but that companies needed measurable outcomes on which to base their investment strategy.

The best way to achieve this, according to SFS, is by looking at manufacturing productivity using specialist financing tools which it described as ‘finance 4.0’.

In its recently published white paper, The Digitalization Productivity Bonus: Automotive – in which it estimates the gains to be made by the automotive industry in 11 key countries around the world – SFS said the move to industry 4.0 required substantial investment in new-generation, automated and digital platforms, but that in automating and digitalising their production systems, manufacturers were set to make productivity gains of 6.3-9.8% in terms of annual revenues.

“In the global automotive industry, it is estimated that conversion to digitalised technology could deliver a digitalisation productivity bonus of between $173.3 billion and $269.5 billion,” it said.

Automotive companies are going to have to fundamentally adapt their manufacturing model to achieve this, however, including using ‘finance 4.0’ tools that are geared towards concepts such as ‘pay-to-use’ equipment and technology financing, with periods adjusted to match payments; and ‘pay for outcome’ models, which arrange base payments on the expected business benefits that automation or digitalisation will make possible.

Manufacturers will also have to make changes as the industry moves to hybrid and electric drive technologies, it noted.

According to a recent study from PwC, 34m units of around 80m units that are going to be sold in the US, Europe and China by 2030 will be hybrid and 44m will be electric. The move to electric transmissions promises to reduce complexity in the supply chain and manufacturing costs, as fewer parts are required for battery electric engines than internal combustion ones (though the battery supply chain has its own special needs).

In its paper, SFS said digitalisation was enabling new data flows, not just within the factory but up and down supply chains. Supply chains are becoming more agile as a result and as communications are shared between OEMs, tier suppliers and service providers, it noted, in turn resulting in major impacts on inventory and supply management, with the matching of near real-time demand data and predictive models to just-in-time ordering and supply.

At the same time, some companies have been cutting out the middle man in traditional distribution networks, it noted, with digital feedback from customers on customised preferences for the vehicles they buy leading to greater tailoring of vehicles. “Mass customisation allows individualised vehicles to be produced at economical cost,” commented SFS in its paper.

The upshot is that traditional automotive business models need reform, said SFS. Quoting the PwC consultancy unit, Strategy&, the SFS paper stressed that return on invested capital was negative in the industry and that the cost of capital would only rise from current levels.

“Experts expect self-driving cars to move into mainstream production by the 2020s,” stated the paper. “ In addition, non-traditional competitors [like Dyson] are entering the electric car market, putting a disruptive strain on margins and distribution channels already under pressure from disintermediated e-commerce car sales.

“As a result, the automotive production environment of the future has to become much more flexible, moving from fixed-chain production to flexible, modular production,” it concluded.