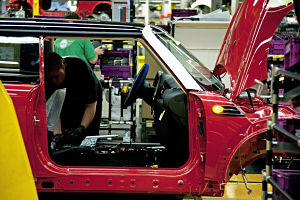 The UK’s automotive trade association has estimated that tariffs on imported and exported finished vehicles could amount to £4.5 billion ($5.6 billion) a year, if Britain makes a clean break from the European Union.

Earlier this evening, Gareth Jones, the outgoing president of the Society of Motor Manufacturers and Traders (SMMT), told more than 1,100 industry leaders and government officials at the association’s annual dinner that a strong UK economy could not be achieved at the expense of jobs, growth and open trade.

“You, our members, have told us what you want; membership of the single market, consistency in regulations, access to global talent and the ability to trade abroad free from barriers and red tape,” he said.

“This won’t be easy. There will be competing priorities. But be assured, as the negotiating positions harden, SMMT will continue to make this case to government,” he added.

There has been much uncertainty on the eventual outcome of Britain’s exit from the EU since the surprise June referendum result, ahead of prime minister Theresa May officially triggering the Article 50, two-year exit clause by her self-imposed deadline of the end of March next year.

In its latest global economic outlook, the Organisation for Economic Co-operation and Development (OECD) said the unpredictability of the exit process from the European Union was a major downside risk for the UK economy.

“Improved prospects of an orderly exit from the European Union while retaining strong trade linkages with the bloc would support near-term growth more than projected,” said the OECD report.

Under a ‘clean break’ scenario, and without any new agreements in place, World Trade Organization (WTO) tariffs would initially apply to imports and exports between the UK and Europe until new deals were negotiated and in force.

The SMMT estimates this 10% WTO tariff would total £1.8 billion per year for the UK’s car exports and £2.7 billion for imports.

According to the association, this would cost consumers an average of £1,500 per car on UK imports from the EU, if brands and retail networks were unable to absorb the additional expense.

While the UK exports vehicles to over 100 countries worldwide, mainland Europe is the major destination, with 57.5% of UK-built cars exported to the continent in 2015. The US was a distant second at 10.9%.

Despite a small year-on-year drop in October, the UK automotive industry remains strong, up 9.2% year-to-date with more than 1.4m vehicles produced, a 17-year record for the period.

Jones warned, however, that this success was the result of multi-billion pound investment decision made years before the EU referendum was even a prospect.

In addition many carmakers’ local manufacturing facilities are intertwined with broader European supply chains. A KPMG report several years ago estimated that in the UK, 37% of the total value of spend in the supply chain was sourced locally and, depending on the manufacturer, between 20-50% was imported from the EU, with the rest from outside the region.

Ford has a significant presence in the UK, not only as the best selling car and light commercial vehicle brand, but also as a producer of more than 1.5m engines annually at its plants in Dagenham, east of London, and Bridgend, Wales.

Importantly, the company does not build finished vehicles in the country any more, importing the majority of cars and vans without tariffs from its plants in the EU including Germany, Spain and Romania.

Meanwhile, after months of doubt over Nissan’s plans for investment in its Sunderland plant the carmaker recently said it would make the next model Qashqai there as well as adding the X-Trail.

The carmaker said its decision followed on from a UK government commitment to ensure the Sunderland plant remained competitive.

'Step-change' from fourth industrial revolutionElsewhere in his speech at the association’s 100th annual dinner, Jones highlighted the massive opportunity presented by technology and the so-called 'Industry 4.0' revolution within the UK’s automotive sector.

“The so-called fourth industrial revolution will be a step-change in manufacturing with production lines developing more over the next 5-10 years than in the past half-century,” he suggested.

Highlighting a new SMMT report by KPMG, The Digitalisation of Automotive Manufacturing in the UK, Jones added: “The Internet of Things will embrace the manufacturing plant, generating data and enabling new human/machine interaction which will revolutionise the production line.”

By embracing these modern technologies, production volumes could increase by 20%, with UK supply chains, including technology and software companies, benefitting by up to £2.6 billion a year, the SMMT has suggested. In addition, the annual economic benefit to the UK economy could total £8.6 billion, according to the report.

“Grasping this opportunity is not without challenge. As always, skills shortages have already been identified. There will be structural changes in the industry and we must protect the industry from intellectual property and cyber threats,” said Jones. “But the prize is enormous, and the UK must take steps now to ensure it remains competitive in the new manufacturing future.”

Toyota Motor Manufacturing’s UK deputy director, Tony Walker, will take over as SMMT president at the end of this year.