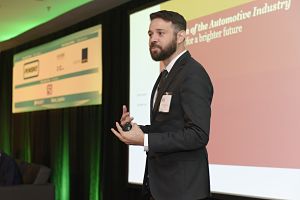 Despite a 25% increase in production this year, the Brazilian automotive industry is forecast to grow only slowly in coming years, delegates at this week’s Automotive Logistics South America summit were warned.

After four years of declining demand, including a dramatic drop in vehicle sales and production in 2016, the Brazilian automotive industry has seen vehicle exports climbing sharply and domestic vehicle sales showing double-digit gains in recent months.

But such sharp increases are unlikely to be repeated any time soon, with the country forecast to grow only slowly in coming years. And recent gains in exports may not be maintained if Brazilian manufacturers continue to face much higher logistics and supply chain costs than other parts of Latin America.

Though light vehicle production is heading towards 2.6m units this year, it may plateau around that number for several years, before growing by around 3.5% per year through to 2023, he said. Only by then might the total number of light vehicles in the country test the 3m-unit level, a full eight years after first dropping below that level and still well off the record 3.6m units built in 2013.

“The scenario of growth for the automotive industry will be very shy; by 2023 we could reach 3m vehicles produced annually and will only recover to the levels where we were in 2014," he noted.

From 1999 to 2013, annual light vehicle assembly in Brazil tripled to its record of 3.6m units before heading into a four-year recessionary slump that resulted in production bottoming at a 12-year low of 2.1m units last year.

Brazilian light vehicle sales, which slipped below 2m last year, may rise around 10% this year. But Paolo Sarti, managing director of South America for Penske Logistics, stressed that this would only leave sales at a level similar to 2007 and referred to the last 10 years as "a lost decade".

“While there is lots to celebrate because the market is picking up again, we are actually going back to the levels of 10 years ago,” he said.

Export hopes, logistics challengesWith light vehicle exports up by close to 60% this year compared to 2016, vehicle shipments from Brazil are not just recovering but approaching record levels. Arsenio said vehicle exports, which serve mostly countries in Latin America and the Mercosur trade bloc, would approach 700,000 vehicles, close to the record achieved in 2005.

[mpu_ad]He noted that the Brazilian government had made efforts to reverse a rising trend towards vehicle imports in recent years, including through local production incentives such as the Inovar Auto programme, which started in 2012. The scheme offered incentives for cars that met certain efficiency levels, where local investments into R&D and automotive technology had been made. The government has also made some efforts to reduce bureaucracy in excise taxes and customs.

However, the biggest factors in Brazil’s export resurgence have been the strength in its main markets, notably Argentina, and a relatively weak local currency; the US dollar is currently worth around 3.2 reais.

Penske’s Paulo Sarti noted that although Brazilian exports were mainly to countries in the South American region, the country could become more competitive on the global stage, especially as major carmakers in the country including FCA, Volkswagen Group, General Motors and Ford produce vehicles in Brazil using global models and platforms.

“[Growth this year] highlights the possibility of Brazil becoming a global base for exports. Many OEMs in Brazil manufacture vehicles with global platforms which did not happen in the past,” said Sarti. “Of course there are a series of issues such as tax costs and logistics costs but we are starting to see Brazil as a potential player in global exports.”

However, Arsenio said not enough had been done to improve logistics infrastructure in the country to favour exports and allow the company to compete with other, more developed production regions.

Neuton Karassawa, director of logistics at GM Brazil, highlighted how little Brazil invested in infrastructure compared to the likes of other large manufacturing countries, such as China.

He pointed to a strong Brazilian manufacturing base but stressed it was one that faced high logistics costs and taxes in the supply chain, compared to countries with which it competes for production capacity, such as Mexico.

For every $100 worth of parts that Mexico imports, he said, manufacturers pay about $1 in customs and duties; in Brazil, the number is close to $15.

“We are so highly productive – but the distribution cost is the worst worldwide,” commented Karassawa.