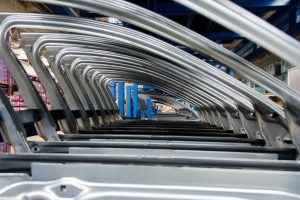 3PL Syncreon is expanding its parts warehouse facilities in Temperance, Michigan and Toledo, Ohio to support inbound services for vehicle assembly at FCA’s plant in Toledo.

The 3PL’s operations in Temperance and Toledo work together to handle parts from suppliers feeding the FCA plant, which makes the Jeep Wrangler.

Syncreon said it would be grouping parts, placing them on a rack in the correct order for assembly, and shipping them to the FCA site. It is also providing parts metering, in which small parts are delivered in bulk to support just-in-time assembly schedules.

The sequencing and metering services will be coordinated and supported by both Syncreon locations.

The company said the Temperance warehouse would be used as a midway sequencing point before parts were sent to the FCA plant for assembly.

“This represents a major expansion of our core value-added services with an esteemed customer,” said Jeff Genord, vice-president of account management at Syncreon. “We appreciate the partnership that has evolved between the Syncreon and FCA US teams as we have worked to optimise their supply chain and deliver ongoing operational excellence.”

The Temperance warehouse is just seven miles from FCA’s Toledo plant and is configured for crossdocking operations. The expanded facility will cover 27,900 sq.m and should create 270 new jobs in the local area, when it reaches full operation in the fourth quarter of this year.

Syncreon declined to go into detail about the expansion at the Toledo warehouse, however.