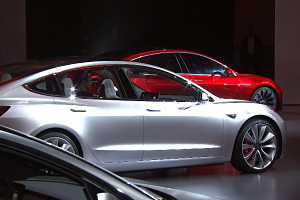 Electric carmaker Tesla says it will produce the first certified Model 3 vehicles this week and hand over about 30 of the new cars to customers on July 28th.

Using the social media platform Twitter, CEO and founder Elon Musk said the Model 3 had passed all regulatory requirements for production two weeks ahead of schedule.

He added that ramp-up of production at its Fremont factory in California would be ‘exponential’ in the months ahead, increasing to 100 in August, 1,500 in September, and 20,000/month in December.

Tesla is currently in the midst of a major investment programme in its manufacturing and supply chain as it prepares for its Model 3 launch and ramp-up of production capacity towards the 500,000 car-per-year level from current annual output of around 100,000.

The company has said it has 400,000 pre-orders for the new vehicle.

Ana Nicholls, managing director of Industry Briefing at the Economist Intelligence Unit (EIU), said: “Tesla has a history of missing deadlines and its targets for the Model 3 were particularly ambitious. Indeed, its reservation website for the Model 3 is carefully vague on delivery dates, saying customers will get their cars ‘in mid-2018 or later’ and ‘as quickly as possible’.

“Given that, its progress in getting at least some of the cars to the customers by the end of July is actually a relief – although it is very doubtful that it will be able to scale up production as fully as it hoped by next year.”

The latest Model 3 production news coincided with the release of the company’s second quarter corporate update, which showed that 25,708 Model S and Model X vehicles were produced in the three months to the end of June. First half production totalled 51,126 cars.

A severe production shortfall of 100kWh battery backs had a major effect on deliveries during the quarter.

The company said the batteries were produced using new technologies on new production lines and that until early June, production averaged about 40% less than demand.

“Once this was resolved, June orders and deliveries were strong, ranking as one of the best in Tesla history,” said the quarterly report.

At just over 22,000 units in the quarter, deliveries were 53% higher than the same period a year earlier.

Said the EIU’s Nicholls: “Fortunately, Tesla has two big things on its side. One is the sheer volume of pre-orders on its Model 3, at over 400,000, which means that it should have some assured revenues coming in as it ramps up production.

“The other is its strong brand and the desirability of its products, which means buyers have signed up regardless of the potential for delays.”