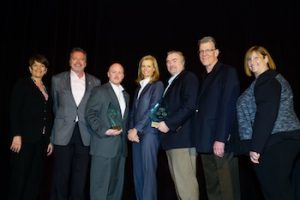 Toyota Logistics Services, which manages Toyota, Lexus, and Scion vehicle logistics operations in the US, has recognised 18 service providers with Logistics Excellence awards for services in 2015.

Its awards are presented in four main categories: Customer Service, On Time delivery and Quality, as well as the President’s Award, given to those companies that have demonstrated outstanding performance in all three. There are also awards for Service and a Kaizen Award for continuous improvement in working method.

During the year, BNSF handled almost 400,000 Toyota, Lexus and Scion vehicles throughout the US and Canada with a 99.8% damage-free delivery rate.

“BNSF was able to improve on-time performance without sacrificing vehicle handling quality in 2015,” said Missy Pearlman, TLS’s senior rail and truck strategy and operations manager. “They continue to display a commitment to kaizen [continuous improvement] and their adoption of this foundational principle of the Toyota Way has enhanced their ability to seek out opportunities for service improvements.”

Pearlman added that BNSF was just as timely with its communication, which allowed TLS to make quick decisions when it came to providing a good service to customers.

“We are honoured that Toyota has recognised BNSF with its highly coveted President’s Award for the second year in a row,” commented Dave Fleenor, BNSF’s assistant vice-president for automotive marketing. “We remain focused on ensuring all vehicles reach their destination on time and damage-free, and the President’s Award is an acknowledgement of how hard our employees work to provide remarkable service to our automotive customers.”

Among the other rail providers receiving awards were CSX, which was recognised with a Quality Award, and Union Pacific Railroad, which took a Customer Service Award.

There was strong showing from the ocean transport sector, too. NYK Line received the President’s Award for Export Logistics Excellence. Meanwhile, Great American Lines, which provides ocean transport services between Japan and the US, received three awards – one each for Customer Service and On Time and a President’s Award for Import Logistics Excellence.

In the road haulage sector, Professional Auto Transport stood out with four awards, including the President’s Award for Truck Logistics Excellence. The others were in the Customer Service, On Time and Quality categories.

“We’ve had the privilege of working with Toyota for nine years and have enjoyed the opportunity to learn from our partnership,” said David Floyd, president of Professional Auto Transport.

“We’ve focused on our processes, aligned them to meet Toyota’s goals and objectives and invested in the equipment and technology needed to continue to improve our service,” he told Automotive Logistics. “Everyone in our organisation knows Toyota’s expectations and works each day to meet them.”

The full list of recipients for the Toyota Logistics Excellence Awards is as follows: