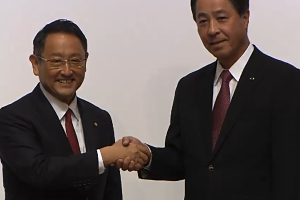 Japanese carmakers Toyota and Mazda have formed a ‘capital alliance’ that will see them jointly build a $1.6 billion plant in the US with a capacity of 300,000 units a year.

The plant’s location has yet to be selected; a number of US states are expected to offer lucrative incentive packages to try and secure the investment, given its value and the 4,000 jobs the new plant will create.

Mazda expects to produce crossover models at the facility that it will introduce to the North American market, while Toyota plans to produce the Corolla there for the same market.

According to Toyota's management, the two companies' respective vehicles will be built on separate production lines within the plant, with Toyota's cars likely built on the New Global Architecture (TNGA) production platform.

“By producing vehicles in the US, Mazda aims to build a production structure to further grow in North America. These activities will allow the company to more quickly respond to its customers' needs, depending on the region and model,” stated Mazda about the move.

In May 2015, the two companies first announced a long-term, wide-ranging partnership. Under this alliance, Mazda’s plant in Salamanca, Mexico, produces the Mazda 2 and 3 models, as well as the Yaris for Toyota.

Toyota is now set to supply a compact van to Mazda in Japan. “Beyond this, the companies will further explore the possibilities of other complementary products on a global level,” said the OEMs in a joint statement.

Toyota has also announced that its plant in Guanajuato, Mexico, which is currently under construction, will now produce the Tacoma pickup truck, rather than the Corolla, as initially envisaged.

“There will be no substantial impact on Toyota’s investment and employment plan there,” stated the company.

The OEM first announced its plan to build the $1 billion Guanajuato, central Mexico, manufacturing facility in 2015, to produce the Corolla at a rate of about 200,000 units a year from 2019. The model is currently built in Blue Springs, Mississippi and Cambridge, Ontario.

Earlier this year, following Twitter attacks on Ford and GM for existing and planned imports of vehicles into the US from Mexico, US president-elect Donald Trump turned his attention to Toyota. In a tweet posted on January 5th, Trump said: “Toyota Motor said will build a new plant in Baja, Mexico, to build Corolla cars for US. NO WAY! Build plant in US or pay big border tax.”

Trump’s criticism of Toyota was somewhat misplaced, as it is not building the new plant in Baja.

He has since welcomed news of the new joint plant in the US, describing it in a further tweet as “a great investment in American manufacturing”.

Toyota already has a plant in Tijuana, Mexico that builds the Tacoma. The vehicle is also built at the San Antonio plant in the US state of Texas.

Earlier this year, Toyota announced plans to invest $1.33 billion at its largest plant, Toyota Motor Manufacturing Kentucky (TMMK) in the US, as it prepared for the TNGA production platform.

Toyota will take a 5% stake in Mazda as part of the deal just announced. Mazda will buy Toyota shares at an equal value to the Toyota share purchase.

Under the new agreement, the two companies will also look to jointly develop technologies for electric vehicles and connected technology, as well as expanding on other complementary products.