[sam_ad id=6 codes='true']Toyota has announced the start of exports of the Corolla from its US facility in Mississippi to Central and South America, and to the Caribbean.

“The export of Mississippi-built Corollas directly supports 2,000 Toyota jobs, keeps our plant running at optimal capacity and increases opportunities for our suppliers and partners while serving our customers’ needs,” said Masafumi Hamaguchi, president of Toyota Mississippi, at a ceremony held last week at the plant. 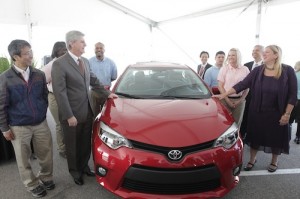 More than 7,500 Mississippi-built Corollas will be exported this year to 18 countries in Central and South America and the Caribbean. The latest move brings the number of US-assembled Toyota models exported to nine and the number of export markets to 32 around the world. All four of the company’s US plants are exporting models.

Toyota exported more than 130,000 units in 2013 – a 5% increase from the previous year and an all-time high for the company.  The company began exporting US-assembled vehicles in 1988 and said it expects volumes to grow as it capitalises on the improving North American and global automotive market.

“Toyota’s growing success in exporting US-made vehicles is further evidence of its commitment to the US manufacturing sector,” said Chandra Brown, deputy assistant secretary for manufacturing, US Department of Commerce, International Trade Administration. “Expanding exports and foreign investment are two of the primary priorities of the Department of Commerce.  We are extremely pleased to have Toyota as a valued ally in these efforts.”