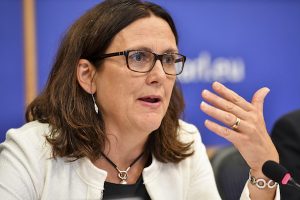 Donald Trump has rejected an EU offer to eliminate tariffs on cars, saying the proposal is not good enough.

Trump said that ending duties on US car imports into the EU would do little to help the automotive industry in the US because Europeans would still not buy American-made cars. “Their consumer habits are to buy their cars, not to buy our cars,” Trump said in a Bloomberg TV interview.

A day earlier EU trade commissioner Cecilia Malmström (pictured) told the European Parliament’s trade committee that Brussels was willing to scrap levies on all industrial products, including cars, from the US.

“We are willing to bring down even our car tariffs down to zero… if the US does the same,” she said, adding: “It would be good for us economically, and for them.”

The EU’s current import duty on US-made cars is 10%, while the US levies 2.5% on smaller passenger cars (but 25% on light trucks and pick-ups). President Trump has threatened to impose 25% tariffs on all cars from the EU, as part of his wider protectionist, America-first agenda.

However, following a meeting in July with EU Commission president Jean-Claude Juncker, he agreed to hold fire on those import duties while the two sides talked about cutting trade barriers in non-automotive industrial goods.

US officials have reportedly grown frustrated by the slow pace of progress and Trump’s latest remarks are seen as casting doubt on July’s agreement. Juncker is more sanguine, however. In an interview with German broadcaster ZDF he said: “As is the case with ceasefires, they’re sometimes at risk but they will be upheld.”

He added that he expected the US to adhere to the agreement to refrain from new tariffs as long as the two sides were negotiating a trade deal. But he also warned that the EU would respond in kind if Trump reneged on his pledge not to impose car tariffs, saying the EU would not let anyone determine its trade policies.

In her comments to the European Parliament’s trade committee, Malmström said the EU had profound disagreements with the US. A working group to be overseen by Malmström and United States trade representative Robert Lighthizer has yet to engage in formal negotiations.